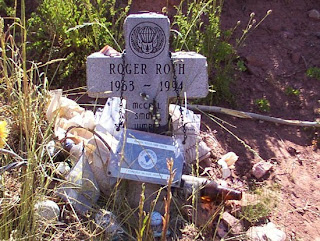 It's been fifteen years.

A lot can happen in fifteen years. In fifteen years, I've married and divorced. I've moved, three times. Babies I knew then have grown into long-haired women. I've grown too, moving incomprehensibly from young to not-so, knees turning cranky, wrinkles fanning out from my eyes. Fifteen years seems like a long time.

There have been other wildfires in the mountains. In the place we used to walk, the water flows in an endless sheet to the Gulf of Mexico. Cabbage palm crowds the sky. The panthers slip in and out of the blanket of night. None of this has changed. To most of the world, fifteen years is nothing, a blink.

There is so much they wanted us to learn from the fire that killed you. We still hear about it, lessons learned, things not to do. We clap on our hard hats, climb the same hills, fight what feels like the same fire over and over. Don't do what they did. As if we are any better. If you couldn't win the race against fire, who could?

Still, I carry your last fire with me, along with the dusty ball cap you used to wear. It was a sleeper, no big deal at first. I think that you could have seen the highway from where you worked or maybe the river. Surely you weren't thinking about dying then. You had just fallen from the sky on the strings of a parachute. Because I was on another fire, a few miles away I know that the sky was cloudless. Probably you moved through the day in a sort of dream like I did, nights without sleep fuzzing the edges. When the wind came, it was a surprise.

I don't remember how many fires I've seen in the last fifteen years. After a while they all blend together, a smooth cocktail of smoke and sleeplessness. Others have died, losing the race with fire. Each time it seems like losing you all over again. Obviously we have learned nothing. Each news report brings the same feeling as the day I heard about you and the other thirteen, dying on a mountain called Storm King.

It's been fifteen years. Each year adds up, another pebble slowly turning to sand. I've heard it can take a thousand years to build one inch of soil. How long will it take the world to forget you? But I don't want to forget, so I talk to the rookies about safety zones and escape routes. They half-listen, because it won't happen to them. They play hacky-sack and chew Red Man, rolling their eyes at the fire grandma. They were in diapers fifteen years ago.

The mountain you died on has burned once since. It will burn again. I can't stop the Gambel oaks from growing, the lightning from coming, the years from passing. But I probably won't go back to the fireline. Fifteen years extra is enough. It takes a younger woman with an unblemished heart, one that does not carry extra weight.
Posted by Mary at 9:58 AM