Humbled by the Matterhorn

First off let me say that I am not a "summit person." I don't gaze longingly at peaks, wanting to bag them (I'm way more into lakes). You wouldn't find me on Mount Everest, stormbound and debating how many toes I would lose in order to reach the top (I'd be the one saying, "screw it, I'm going down to base camp!").

But there is the Matterhorn. It is either the second highest, or the highest, peak in the Wallowa Mountains. It is locked in an ongoing feud with Sacajawea, which is either the highest or second-highest. At 9,845 feet, the Matterhorn is pretty darn high, though, and it is way cooler because it is made of white limestone (the compressed skeletal remains of tiny marine animals, probably coral, deposited on the ocean floor many millions of years ago, according to my guidebook). If you pause to think of that, it's pretty amazing, considering the nearest ocean is several hundred miles away. There's no denying that the sheer white face, soaring above Ice Lake, is distinctive and makes you want to discover what is up there. 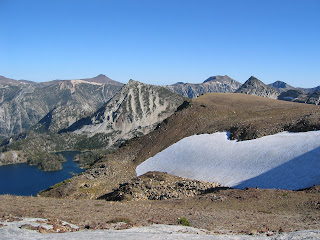 Ice Lake from about halfway up the "goat trail".

I threw my pack together and ascended the trail to Ice Lake in three hours (that's 8 miles and lots of elevation gain with a backpack! Go me!) and was feeling pretty puffy about doing that and also climbing the Matterhorn the same day. Of course, pride cometh..etc and I was passed by a line of trail runners, who were doing the same thing. Only running. And doing it all in one day, instead of staying over at the lake. Chastened, I continued my hike.

At the lake, I was crestfallen to find many campers. The delightful weather had brought them from Portland in droves. My friends Dana and Troy were just leaving and clued me in on a campsite on the end of the peninsula, sufficiently far enough away so that I wouldn't have to see the illicit activities of others (oversize groups, campfires). I threw up my tent and collapsed my pack with the essentials. Matterhorn, here I come. 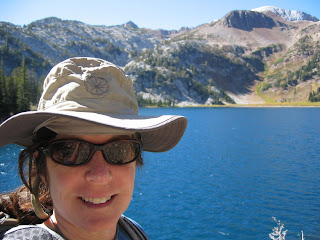 Floppy hat and all. That white mountain in the very far distance is the Matterhorn.

There's a goat trail of sorts that leads to the top, and people have placed cairns haphazardly about. In their wanderings through the talus, several different trails have developed, and I hopefully followed several only to have them peter out on cliffs. The first part of the hike wound through a grassy slope, so steep that I, and the guy I was following, had to slog in slow motion. Step, breathe. Step, breathe. We passed some college kids. Then the route turned to talus and what rangers fondly call "DG"--decomposed granite (though in this case it's limestone. Same slippery little ball bearing rocks though). A harried looking couple approached, clinging to their hiking poles for dear life.

"I don't know about climbing down this!" I yelled over the rising wind.

The man screamed back something unintelligible. "What did you say?" I hollered."It's not that bad?"

He slid closer. "No, I said this is pretty nasty!"

Ugh. But I was committed. I had passed Fellow Slow-Moving Guy and my destination mentality had kicked in. The Matterhorn loomed above, a white monolith with a flat top. I picked a path and kicked steps to the top. 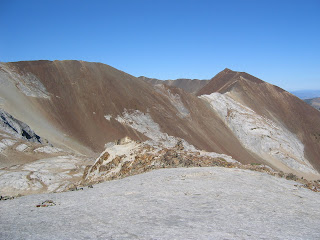 
A sea of mountains spread from every direction. To the west I could see a little pocket lake and the Hurricane canyon. Sacajawea loomed to the north, mountain goats clinging to its cinder flank. The top was smooth, rounded white. Below, Ice Lake's surface was ruffled with whitecaps. 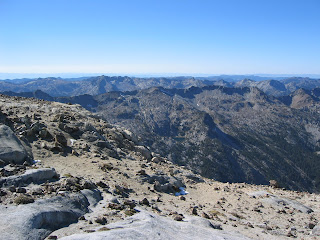 I wanted to sit there and drink it in, but the wind howled like a living thing. It was thirty, forty miles an hour, threatening to blow me off the top. Retreat seemed prudent, so I slid down to a lower elevation. Footsore and rumpled, I limped back to camp.

That night a nearly full moon washed over the top of the Matterhorn. The planet Jupiter kissed Sacajawea's shoulder. Up there, at almost ten thousand feet were the remains of the sea.
Posted by Mary at 11:45 AM