the secret lives of botanists 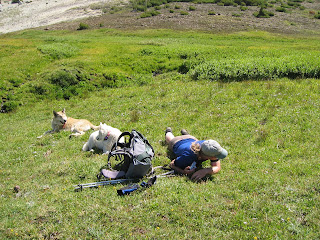 If you have to be stuck out somewhere, let's hope a botanist is your companion. A few years ago Brad and I were irrevocably stuck at White Sulphur hot springs (and that is something else. If you have to be stuck out, pick a hot springs. Nobody will feel sorry for you, but it beats perching under a sagging tarp on a rock somewhere). Unlike other stuck-out companions, who paced and snarled and made impulsive plans to hike to saltwater without a map, Brad just shrugged and accepted the situation. He cheerfully carried gear back and forth between our cabin (yes, we actually had a cabin. It raised being stuck out to an art form) and the small lake where Hans the pilot was going to land. He consented to highly incriminating photos of him floating in the hot springs, absorbed in a Cosmo magazine that had been left behind by other campers.

I can't ever remember the names of plants, though I have worked with botanists often. I trailed after Brad as he bounded through the alpine. "Hey Brad, there's some of those fuzzy dudes over here," I yelled. When Kitty was diligently looking through her hand lens, I was more interested in jumping in a small alpine tarn. I amused Jerry by referring to a plant as a "five-o-clock". I don't really care what plants are called. I just like seeing them. But botanists care. Kitty once hauled a huge plant press down from a lake where she was stuck, miles and miles of scrambling over trailless terrain, when she could have cached it for future float plane retrieval. Brad endured gut-clenching plane rides to get to interesting habitat. And Jerry carries five pound plant books in his backpack, when the rest of us try to go light.

You have to love them in all their slightly geeky coolness. Botanists, soil scientists, anyone who actually gets down on knees and observes minutiae that the rest of us unthinkingly plod over. I am such a generalist, such a big-picture wilderness specialist, that the little pieces and parts that make up the whole often go by unnoticed.

In the company of botanists, I have learned that carrying an umbrella is actually not a dorky thing. It is perfect for cooking under in a light drizzle, for a quick nature's call, or to shade the sun when you are peering at plants. I have learned that one night of camping on grouse-whortleberry removes 50% of the vegetation. (Don't do it). I've experienced the heart-thumping thrill of helping find a plant that just may be a whole new species. I've found a new population of an endemic species on a ridge previously unknown. I've grown to appreciate tall white socks as protection from the elements.