take me to the river 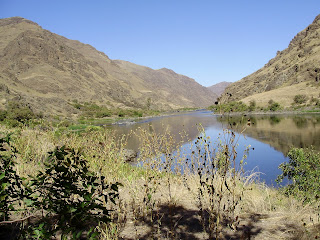 Around here, when you say you are "going to the river", everyone knows where that is. Although this is a valley of many rivers, there is only one River. It's the Snake, the border between Idaho and Oregon, the river that carved out Hells Canyon.

When you descend to the river, like we did last week, it's like crossing the border to a different country. There is such a thing as river time. You can make all the plans you want, to be back at the launch by two, to reach Temperance Creek by nine--but on the river time stretches, elongates. The air is thick as honey and the river flows, a sluggish muscle, until it doesn't. The rapids--Rush Creek, Wild Sheep, more--produce standing waves. Mike points out rocks that hide at lower river levels. Unlike the Southeast Alaska coast, here there is no handy Coast Pilot book, no NOAA charts. You have to learn the river the old-fashioned way.

It feels like nothing ever changes on the river, but it does. Years ago Idaho Power raised water levels from the dam and flooded away massive white sand beaches. Even further back, people lived on the benches and bars, eking out an existence. We hike to the "Cartier Mansion", once one of the fanciest dwellings on the river, the owner having used Mazama ash and deer hair to plug in chinks of his multiple room house. Now it is inhabited by pack rats.

We sleep at an old ranch, pears dropping off a tree some long-ago settler planted. Owls hoot softly back and forth. Here it is still summer. I know it will get colder, but it feels like this place is frozen in time.

You feel lazy on the river, watching the deceptive current. Jeff and I calculate where we would have to start from to swim across and reach the distant shore. Laziness and reason prevent us from trying it. But in the old days, people weren't lazy. The volunteer at Kirkwood tells us that her grandmother lived at Saddle Creek, and remembered stories of canning in 120 degree heat. At Temperance Creek we poke around the old farm implements and squat log buildings (Temperance Creek Ranch was named thus when a mule carrying the winter supply of whiskey rolled, losing the load. The ranchers were resigned to a season of temperance).

As usual, river time expands and we reach the landing at four. Driving back home would take nearly five hours. We want one more night of listening to the river flow. So we stay.
Posted by Mary at 2:44 PM