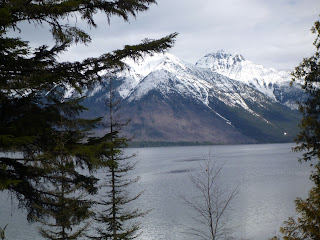 As I was riding an old cruiser bike in Glacier National Park this weekend, I thought about my relationship with the national parks. The answer is, it's complicated. I worked for the Park Service for years in underpaid and underappreciated jobs like fee collector at the entrance booth, visitor center staff, and taker of tourists on nature walks. Mostly this meant I was screamed at by those whose vacation was not going well and/or asked repeatedly where the bathrooms were.

But I loved the parks themselves, mainly because in the evenings and mornings they belonged to us, the footloose summer seasonal workers who lived in grimy bunkhouses tucked safely away down a "Service Road, Employees Only." I saw the park in all its moods--right at sunrise, before everyone else awoke and the day began; during immense early snowfalls when everyone else stayed home; and in the evenings after everyone else retreated to their campgrounds or Rvs or motels outside the park. As seasonals we knew secrets the visitors could never know. Where the backcountry caves were. A hidden grove of Sequoia trees. The best campsites.

We rode our ancient bikes along the Going to the Sun road, amidst a crowd of serious bicyclists with fancy gear. I could have sped along twice as fast on my new bike, but who needed to? We had all day. The snow would stop us eventually.

We park the bikes in a snowbank and head up to Johns Lake. Nobody's going to steal these bikes, so we head up the icy trail. It's too early for grizzlies, we think optimistically, but we talk as we negotiate the left-over snow. The lake itself is in the grip of winter, recent ski tracks curving across it. Summer is months away, but I can feel it in the air, a promise, as we return to the road. 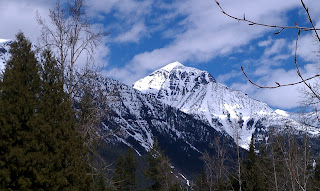 The frontcountry of the national parks always kind of bothers me, because it projects a sanitized Disneyesque quality. It's fairly predictable: the paved overlooks, the gift shops, a lodge or two. Most visitors never step off the pavement to the immense wilderness beyond. But if the frontcountry lures people out of their houses and off their couches, it's better than nothing.

Today I am mostly a pavement tourist anyway, due to time and snow. And that's okay. We grab our old bikes and cycle on. Later we ride on the bike path, just free of snowbanks. The campground isn't open yet, the park buses parked, the tourist cabins shut up. It's a park holding its breath. I realize this is just how I used to feel as a young seasonal worker in those off-times when the park was all mine. Pretty soon this park will be bursting at the seams. But not today. Today there's enough room to putter along on a cruiser bike, taking my time. 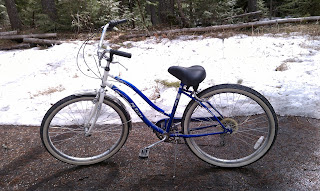