You may have heard of a guy hiking the PCT in a series of wedding gowns.
Unfortunately, I won't be nearly as fashionable on the JMT. But I will be colorful. After some trial and error I have settled on the following outfit: 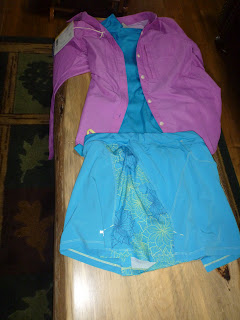 Outfits are important. When you'll be wearing the same thing for three weeks, you have to keep it from being boring. Even wedding dress guy is changing it up, choosing from 26 different gowns.

Most thru-hikers of long trails get bestowed with trail names. You don't really have that on the JMT; you aren't spending months of your life on this trail. But it did start me thinking about some of my former outdoors nicknames.

Panther Babe: Named by the guys who drove dozers into the flaming swamp. I worked at a wildlife refuge set up to provide habitat for endangered Florida panthers. If the guys thought I looked cute in fire clothes and a hard hat, who was I to argue?

Darted Monkey: One day Mike and I were running down the highway on our PT time. My knee hurt but I stubbornly continued, refusing to let Mike get ahead. Mike looked at me and laughed. "You're running like a darted monkey!" he said. This nickname stuck for a long time.

Queen Mama Dork: I don't know, I guess the other wilderness rangers thought I was a dork. I think they were the dorks.

Target: Pronounced the french way, because a tree almost fell on me as I was mopping up a wildfire. The crew peered over the hill, eyes wide. Luckily I had survived, but we all got hazard pay, unheard of in mop-up for us.

Wilderness Witch: I'm pretty sure that this was said in affection but could refer to my adherence to Leave No Trace, including packing out orange peels.

I don't have an outdoors nickname anymore. You get those from working with a crew, the same crew that will do things like put mousetraps in camp slippers, vaseline on locker handles, and even smuggle a small alligator into the passenger seat of a Ford pick-up. We called our crewmates names  like Bungalow Bill, Weebles, PuffyPoo and Trail Beast. Behind the teasing was a real affection that we couldn't quite show.

That's why trail names appeal to me. Hiking a long trail is like being on a crew of sorts, a loose-knit family of hikers all bound for the same destination. I don't know that I will ever hike a long trail for five months: days and weeks of hiking 20 miles a day doesn't really appeal to me. But in my colorful clothes, I can taste a small part of a big thing.

Have you ever had an outdoors nickname? What was it?