Here is the thing about going to a place on the map where you have never been, and nobody you know has either: it can go a number of ways. You don't know until you try it and its uncertainty is what makes it adventurous.

Nothing really goes wrong in Hells Canyon until you drop off the rim. In July, on a "trail" that begins as a steep slide down loose scree and eventually disappears in the brushy aftermath of the Battle Creek fire of 2007. We kept telling ourselves that it was only going to be a thousand foot drop, and only three miles one way. But as I have learned before, and obviously forgotten, "only" means nothing in Hells Canyon. 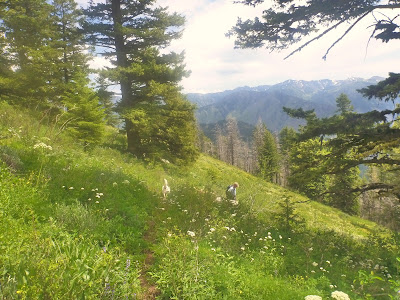 We had left the springs on top hours before. The heat settled around us with a vice grip, only alleviated somewhat by a down canyon breeze. We were headed for a mysterious high point on the bench, a  place we were sure would be well worth the suffering. 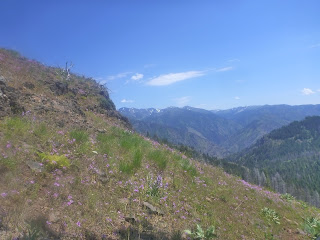 Up and down we trudged over rocky outcrops, broiling in the sun, the high point never getting closer. "This is endless," I screamed at one point, the Princess coming out briefly. "I hate Hells Canyon," my  husband snarled. But we didn't mean it, not really. Even though we should have turned around when we realized we only had a liter of water left between us, even when we knew it had taken us over an hour to go a mile and a half. We were deep in the throes of a canyon seduction. 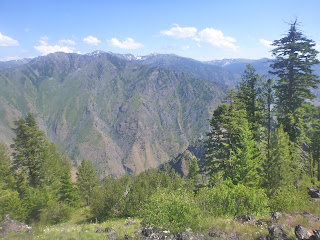 We ducked into a patch of forest, any semblance of a path completely gone, pushing through knee-high fireweed and over immense fallen logs. In here a hint of coolness tempered the near ninety degree temperatures. It was obvious nobody had been here in years. 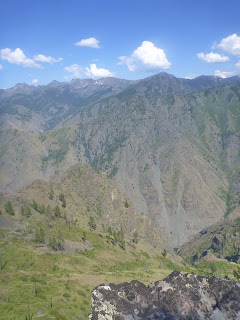 On the high point I stood on some rocks and looked at the Snake River far below. The view wasn't any more spectacular than any other place I have been. We could have, probably should have, stayed on the rim and hiked the spectacular, wildflower-strewn path to an old lookout. But I knew that I would have looked at the blank space on the map and always wondered. Now I knew what was there. 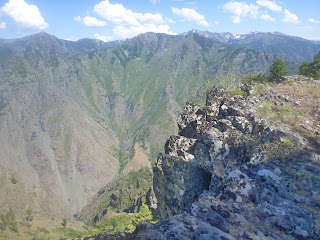 "And we don't ever have to go again," my husband said, back at camp. We sat staring at the Seven Devils, a rugged outline over on the Idaho side. There is so much country out here, roadless and wild and crazy. You are only limited by what you can carry. We both knew better, we agreed. Years of scrambling around the canyon had taught us better than this. There are no onlys in the canyon. We vowed to remember next time. 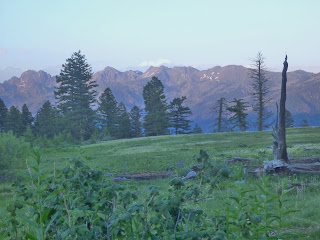