I awoke to the drumbeat of rain and the sound of wind skulking around the house. The entire week I had been assaulted by a vicious cold, my first illness in three years. I wasn't at all sure I could run, but today was the memorial run I had organized in B's memory. I knew I would soldier through no matter what.

A strange and miraculous thing happened as the time grew closer. Totally unforecasted, a bright sun broke out and the clouds parted. The temperature rose. It was, briefly, summer.

A small group gathered and started out swiftly. It immediately became apparent that I am not in fast running shape. When the long hill came up, pretty soon everyone was ahead except for the woman pushing an 80 pound stroller. Not far ahead, but ahead enough to let me know that I definitely have become a slow runner. I felt bad about this until I reminded myself that this wasn't about competition. It definitely wasn't about me. Instead it was a run to remember someone who left us too soon. 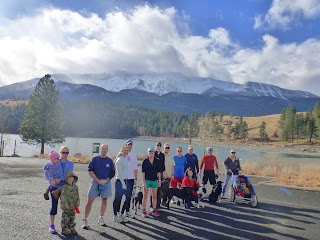 After a fast 1.3 miles we all gathered at the lake parking lot to wait for the walkers so we could all be together. Then we ran back through the park. I don't know our distance. I don't know our time. It really didn't matter. It was a short and simple run, the perfect thing to be doing.

The memorial service afterward was heartbreaking. The hardest thing was hearing the final call-out. When a firefighter passes on, at their memorial the Dispatch office will call them on the radio one last time. Of course they don't get an answer, and Dispatch concludes by saying, "this is the final call for (B)." After hearing Dispatch call B countless times on fires and hearing his response, it sunk in that he really, truly was gone forever.

Or maybe not. Right after our run, the clouds gathered again. For that thirty minutes as we ran in a band of togetherness, it was the only time the sun shone all day. B had a quirky sense of humor. Often he would glide up to one of us and say something completely off the wall. Then he would rush off to mess with someone else, leaving us open-mouthed, trying to process what had just occurred. It's hard not to believe that he was doing that today. Maybe it isn't the final call-out. Maybe it never really is. 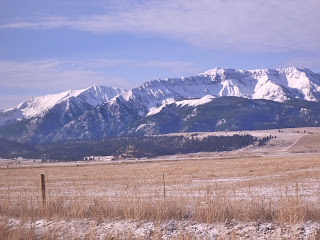