Notes from the edge 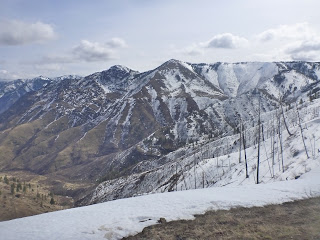 I've always been drawn to precipices. Saddles, divides, ridges, passes. Places where weather changes and water separates. Places where choices must be made: travel into new, unfamiliar country or turn back to the known? Maybe this is why I traveled so much; the difference between the humid Florida glades and the sunny Sierra was like dropping off a cliff every six months that I moved between the two. There's just something about that line that separates two very different places that entices me every time.


The hike up to Freezeout Saddle, where the canyon breaks begin, the division between the Imnaha River and the Snake, could be characterized as a slog. But it ranks low on the sloggy scale because of the endless switchbacks you grind through instead of a straight shot to the sky. It gives you room to breathe and take it all in. The elevation gain is modest too, just under 2,000 feet in three miles. Throw in a few snowbanks to posthole through and you ramp up the effort level a little, but there was nobody but us in sight and a big bowl beneath us. Completely worth it.


As always I wanted to keep going, to descend into the folds of the canyon and stay for the night, for weeks, months. There's something about canyons that do that.

It's a good thing I sometimes bring friends with me because it keeps me from committing foolish acts like dropping another two thousand feet to the bench trail just to "see what it's like" with only a puffy jacket and a handful of crackers. In the end we turned around, but I wasn't sad. I'll be back in a couple of weeks, and the pass isn't going anywhere. 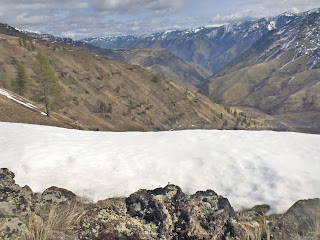