My snowshoes slid on the snowfield, useless on this type of traverse. Maybe I can kick in steps, I thought. I tried, barely penetrating the soft upper layer. Or, maybe not.

The first seven miles, climbing from 5,000 feet to nearly 7,000, were snow-free, strange to see in early June. But here, just above the last basin, the snow was a thick, impermeable blanket. Part ice, part postholey slush, but angled in such a way that it was impossible to get purchase. I was still a mile and a half from Ice Lake, and the last mile, flinging myself over a snarl of downed trees, gingerly inching over snow, had taken an hour. Going up is always easier than going down, I knew.

I stood there with my backpack. Ahead of me, more steep snowfields. Below, a straight shot off the cliffs. So many things could go wrong here. I was alone. There had been no other backpackers at the trailhead. I sighed. I had to turn around.

I'm getting better at turning back, but it is not a graceful process for me. I stared dejectedly at the waterfall that signaled the lake basin. I had worked feverishly at the computer to get this time off, packed in a hurry, balanced all the life things that could make this trip happen. But I've been on enough search and rescue missions to know that this was the tipping point. Some of the people we carried out of the wilderness were just victims of bad luck, but most had ignored that tickle in their brain that warned them to go back.

I hoisted my pack and picked my way down to the lower basin. There would be no Ice Lake on this trip. Instead, I watched mountain goats tiptoe across Sac's red cinder face. I bushwhacked down to where the lower falls dropped abruptly off the cliff. I should know by now that the lake isn't going anywhere, that there will be other weekends, but sometimes it feels like a drumbeat in my head. How many more years am I going to be able to climb like this? A long time, I hope, but you never know. Sometimes I want to see it all, do it all at once. 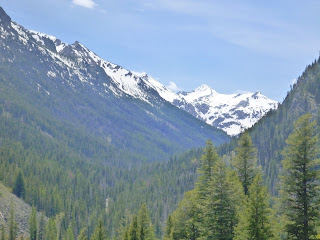 Still, a night out is better than anything else. I settled in and fired up my Pocket Rocket to make dinner, setting my bandanna on fire as I attempted to use it as a potholder. Obviously I need a better solution.

Temperatures hovered in the forties and I snuggled warmly into my sleeping quilt. It is from Katabatic Gear and I am the first to admit it is freakishly expensive. However, for a very cold sleeper trying to become a lightweight backpacker, it may be my new solution. There are cords that attach to your sleeping pad so when you toss and turn as I inevitably do, you stay in your quilt. Bonus--no more sliding off my sleeping pad like I do in a mummy bag. I think I'm sold.

The days are long now and I was hiking out by 5:30. I love hiking like this in the morning, when nobody else is around. (Actually, nobody was camping at all in the this section of the wilderness--where are the people?). By the river, an elk stopped to stare at me. I looked back at the snowy peaks. I'll get there soon.