Under a white hot sky: hiking the PCT, Chester to Burney 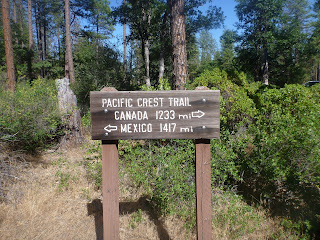 We hiked through a dusty, thirsty forest. How could it be so hot at five thousand feet? But it was. Ten miles out of Chester, we stopped at the North Fork of the Feather River, one of the few water sources out here, just outside of Lassen National Park. Our only companion was a thru-hiker inexplicably clad in hiking boots (most thrus wear running shoes) who also inexplicably started a campfire. It was way too hot to sit by a fire. Fire Boots, as we dubbed him, told us he was hurrying to catch up with his friends, but had stopped early to camp, inexplicably. We never saw him again. The whole thing was a mystery.

In fact, this whole section was mysterious. The first three days we hardly saw a soul, although we had heard rumors of crowds of thru hikers, terrified of the Sierra snows, skipping up here to walk on dry trail. Strangely, nobody was around. There was also the man who ran past us having apparently misplaced his pants, since he was clad in plaid boxers and wool long underwear bottoms in eighty-degree weather. What was up with that?
Crossing into Lassen National Park, we were well aware of the weight of our required bear canisters. A recent policy change has made these mandatory, though nobody asked to see ours. Despite our need to press on, we lingered at the strangely alluring Boiling Lake. 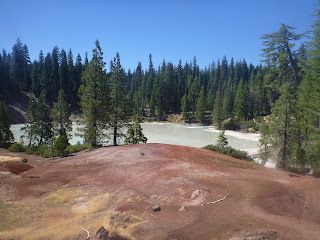 The Chips fire roared through part of this section in 2012, changing things for generations. This was the case at Swan Lake, our second night's destination. The downfall and standing snags made camping nearly impossible near the lake, but we finally found a hidden site that the fire had left untouched. Just getting to this spot was challenging--a tough winter has brought lots of deadfall and left lingering snow, enough that we had to scout for the trail. The next lake in the chain, Twin, had been spared the worst of the fire.

While this section was puzzling, it was also brutal. Mostly flat, it was not the elevation that was the challenge. We packed by headlamp to begin a 29 mile waterless stretch across the Hat Creek Rim. An escarpment rising high above the surrounding landscape, the Rim does have one spring, but you must descend .03 miles to get to it, losing 500 feet of elevation.

Still, the Rim is beautiful, one of those starkly beautiful places where you know survival is only possible by carrying enough water. Burdened by four liters, we trudged through blazing sun. Jan put up her umbrella and I was jealous of her portable shade. Still, we were both glad when we found a dry campsite with a sunset view of Mount Shasta, some red-lit wind turbines, and the peaks of Lassen National Park.

In the morning, we still had eleven miles to cover to the next water source. We dropped off the rim, the heat intensifying.  The water source was a sluggish little creek and we agreed to press on to a river shown on our maps. However, when we arrived it was a fishy smelling place. "I see a spigot," Jan said, climbing over to fill our dirty water bags (we filter from these). I imagined a faucet, but looked over to see her filling from the discharge of the hydroelectric plant. Oh well--that probably isn't going to be what I die from.

A few generous souls maintain water caches in this section, but it's best not to rely on these. However, one called the Wild Bird Cache lifted our spirits with cold lemonade and pretzels. Thank you, trail angels.


Though we had planned more time for this hike, in the end we covered 88 miles in 4.5 days, ending at the luscious waterfall at Burney Falls State Park. (Note to future hikers--if you come into the State Park from the north, do not camp at the headwaters "PCT camp"  unless your idea of a good time is to bake in a clear cut over half a mile from the falls, the river, or the camp store. Head to the park itself, which has walk-in hiker/biker campsites for $5 a person). A few thru-hikers straggled in, all with their own tales of snow in other sections. Back at the Feather, we had met the first person (we think) to make it through the Sierra and get this far without a flip or a skip. Hike on, Breeze from South Carolina.

The TL, DR: This is not a section for the faint of heart. It's not the most scenic, though it has its moments. This section brings me up to 1,660 miles of the PCT completed--one thousand to go. Hopefully in cooler weather!
Posted by Mary at 3:15 PM