The Better than Nothing Mantra

As I sat to write this blog, my cat Puffin plopped himself on the keyboard. When I had to reach around him to get to the keys, he growled. I get it, Puffin, I do.

If you look around you on social media, it will seem like everyone but you is constantly on the move, having amazing adventures. Nobody really writes about the times in between, when it's all kind of...ordinary.  When you just go to the gym, and to work. Please tell me you have those days too.

I've been in this space since returning from the tropics. Winter has lingered on, but the snow isn't great for skiing. It's been burnished to a hard sheen, perfect for catastrophic falls. The trails aren't giving up their snow either. You posthole and slide on ice, neither condition good for running or hiking.

It's at times like these that I'm glad that my life doesn't revolve completely around the outdoors. Every day doesn't have to be an adventure worth documenting for others to like. What have I been doing? Revision, mostly, trying to decide if my kayak ranger memoir is worth publishing. Finishing up my latest novel to send to my agent. This is mostly a seesaw of despair and elation, a one person, solo ride that nobody really cares about, much. My other books continue to sell, slowly, not at a rate I would like but better than nothing.

I've been getting out as much as the country will let me. Ruby and I made a couple of brief forays, one to the lake, where we walked along the edge and dreamed of swimming someday (well, she swam, but I'm not that brave). 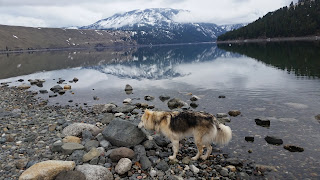 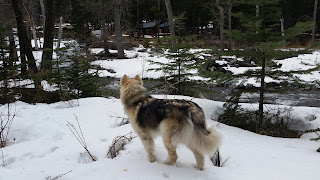 We also attempted a hike on the East Fork Wallowa trail, but the snow was impossible (though not for the dog), so we wandered through the closed campground instead. It wasn't incredibly satisfying, but better than nothing.

I've also been slowly prepping for my next PCT hike which will take place in about a month. Much to my surprise, Flash has decided to go with me. That makes me happy. I've agreed not to charge up the hills (my superpower) as long as she doesn't leave me too far behind on the downhills (her superpower). When I first decided to do this section in May, the locals there had dire warnings of how hot it was going to be. "You should go in the winter," they warned. But this has been a snowmageddon in California, and people are currently skipping parts of that section. So it was the right decision after all. Since the section begins at a McDonald's, I've decided to pack out a milkshake. I rarely darken the door of a McD's, but 20 mile days are the exception.

It is easy for me to get grumpy at the current conditions, but I keep telling myself to do something every day, something is always better than nothing. Maybe it's someone telling me they loved one of my books, or a stroll along the moraine with a friend. It's not exciting, but it's still good. Hang in there friends, summer is coming.
Posted by Mary at 4:42 PM