so many trails, so little time

I ran down toward the waterfront trail, the flashlight app on my phone lighting up the dark street. I would rather run in daylight, but I had to be at the office early, and I were going to work a thirteen hour day with no chance to get outside. So dark it was, although I saw hints of the future sunrise. 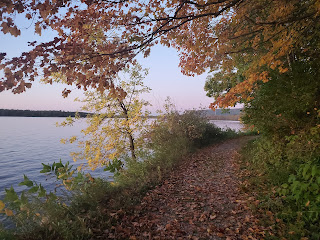 Because I was staying at a hotel without a gym, and because there was no time to go to a gym, I was going to have to run a lot while I was traveling. Which was fine because Duluth happens to have hundreds of miles of trails. You can take your pick, and I did; the waterfront, the flat gravel trail behind the zoo, the Superior hiking trail, a series of biking trails, and even a hawk reserve.

The sun began to rise as I ran back toward the hotel. Two older guys were parked in lawn chairs below the campground. "We're just watching traffic," they announced. "Am I winning?" I hollered back.

Back in the day, before knee surgery, before I fell on a trail run and things seemed to hurt more after, I used to run six days a week. I think it's healthier to cross train, but I miss the feeling that running gives me. There's nothing else that compares, except perhaps cross-country skiing. Still, I'm glad I CAN run, even if it's slow, even if stuff hurts, even if people pass me.

The time and pace I run now would have horrified me, but I don't care. There comes a time when you're just grateful you can still do it. That doesn't mean I don't push it sometimes, but I also try to take it all in while I'm out there.

There was also hiking to be done!
While marathons and a 6 minute pace might be behind me, whether by age or desire or a combination of both (I mean, I don't really want to hit up the track anymore), I just keep on trucking. This past week was a good opportunity to revisit the every day running. I didn't experience any ill effects, but I think I'll continue to cross train, just because it makes me feel better to challenge myself in different ways. When I ran all the time, I was really, really good at one thing--running.

I'm home  now, where an early snow has basically closed off all the running trails. I'm sad about that, but it means one thing--skiing!