To not slow down

I slogged up the mountain in pursuit of R and A, who were comfortably skinning on skis. They were only going up for the day, but I carried a full backpack to spend the night. My snowshoes felt clunky compared to their skis, but this slope was way too steep and technical for me to ski it, thus the shoes. Still, I couldn't help but think how difficult this was, sinking into deep snow as I shuffled along. After all, it was my birthday the next day. Maybe it was finally happening, the slowing down that my older friends had mentioned. Though I have accepted this with running, I am not ready to acknowledge it with other adventures.

But. Snowshoeing is hard. Though it isn't the hardest activity out there, snowshoeing with a full pack in deep, powdery snow isn't the easiest either. "I used to like snowshoeing," A says as we ascend yet another hill. "Then I started skiing." I can see her point. Though they have to skin up the mountain, it takes them half the time to get back down. I stomp along, feeling slow and old.

But as we reached the cabin, R said, "You are the fastest snowshoer I know." Maybe I wasn't slowing down, not yet.

Because there is a very small adventure pool here, I often find myself out hiking or skiing with friends that bridge a wide age gap. The other day in our party we had someone who was 25 and someone else who was 67. In a larger city, I'm not sure this would happen; I have noticed on the online groups that people tend to stick to their own age bracket. They're missing out. My older friends fill me in on life in these mountains forty years ago, and the younger ones bring a spark of enthusiasm that I appreciate.

At the cabin, I opt out of the mountain climb with the others in order to stay with the older dog, who wants to go but probably shouldn't. He whines a bit, upset to be left. But then his young buddy, Ruby, can't stand to go without him and bolts back to us. Despite the age difference, they love each other. We sit by the fire and read and take dog selfies. "We'll go out later," I promise the old dog, "when there's a trail packed down."

Later we climb high, looking over as far as Idaho. The wind has stopped and, at thirty degrees, it feels warm. The old dog bounds down the hill like a puppy. He's not slowing down that much either, not yet. Neither of us are. 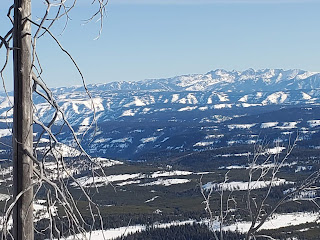