A big storm was coming, several feet of snow in the mountains, and I wanted one long hike before it arrived. The snow was predicted to fall all day, but not intensify before four. Could I hike 13 miles and several thousand feet before then? Yes, I could.

A dismal rain seeped through the trees as I climbed through the uninspiring first few miles of the hike to Aneroid Lake. There's no good way to say it, this is frankly a slog, with only partial views, but mostly rocks, a fairly unhealthy forest, and no break in the climb. Several fallen trees draped the trail, victims of the intense winds we had gotten a few days before. If it gets really windy, I'm turning around, I thought.

The rain turned to snow after three miles, and I had yet to shed a layer, unusual on this steep hike. I was wearing a rain jacket, a wool top and, yes, pants. Snow is always better than rain, but I worried it would start to fall so heavily that I would flounder in my trail running shoes. If the snow starts to stick, I'm turning around, I thought.

At the bridge that marks 4.2 miles, the snow was sticking, but I knew that after this point, the trail slowly begins to level out after a final climb. To get this far and not at least get some views seemed sort of criminal, so I pressed on. If the snow starts to get deep, I'm turning around, I thought.

The reward of the climb is a stroll through tawny meadows and views of the higher peaks of the Northern Blues. There were no footprints in the skiff of snow that was fast collecting. I was the only one on trail.

Because I didn't stop, I reached the lake before noon. Gone was the crush of campers; the lake was still. Fog kissed the surface; there were no real views today. Stopping to eat an protein bar, my fingers quickly succumbed to the cold. It was, after all, only about 20 degrees. I couldn't sit and admire the lake; winter was coming. 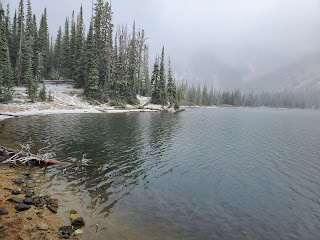 There is a private inholding at this lake and for a brief moment I fantasized about spending the winter in one of the cabins. I've always wanted this--extreme isolation for a distinct period of time. But not today; I had to get down the trail.

And none too soon, because snow had already filled in my tracks. As I hiked fast to get warm, the fear of cold crept in. Even though I carried all the gear I needed to survive, I thought of all the hikers who have disappeared in cold places. I get cold easily and this is why winter will always feel a little alien. 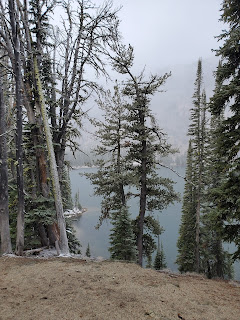 About a mile and a half down the trail, a woman appeared, hiking toward the lake. A kindred soul! "I figured I was the only one crazy enough to be hiking up here in this weather," she said. After she left I regretted I hadn't gotten her name. There are so few people who like to do the kind of hiking I do.

As I descended, the snow turned back to rain. My mittens were soggy and useless, but I wasn't cold any longer. Looking back, all I could see was white. The season of cold is here.