In the 90s, when I worked in southern Oregon, our workplace was blessed with a gym. Not a fancy gym, but it boasted a weight machine, two treadmills, and one of those old school Nordic track ski machines. Myself and two old guys--who really weren't that old, now that I am approaching their ages--were the only people to take advantage of the gym. Jim insisted on the oldies station, so that was what we listened to. He took one treadmill and I took the other, and Dave manned the ski machine. We made fun of him for it, but he insisted it was a good workout. Now I am thinking he was right. 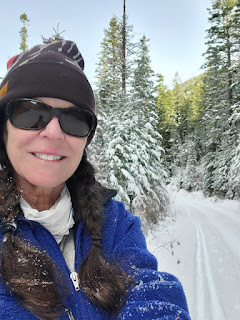 It's the same every year. Even though I know it's coming, the first big snow brings a scramble. Where is the maxiglide? The musher's secret for Ruby's paws? What do I even wear to ski? At the same time, the depressing seasonal reality sets in: you can be fit, but ski fit is something completely different.

Outings are completely different now; friends that used to go skiing don't want to go anymore.  "After the pandemic," they say, or they say nothing at all. I've learned through this who my true friends are. It is going to be mostly a solo winter, but a few friends in my Covid bubble still hang in there.

A and I push our way through the perfect kind of snow. Some people dream of groomed trails; we like breaking it through fresh powder. We spy wolf tracks in the deep snow. Strangely, nobody else is out. We take the road up, and even though I run it in the summer, it is harder on skis. A feels the same way. "I'm so out of shape," she says, even though she isn't. It's just ski fit. 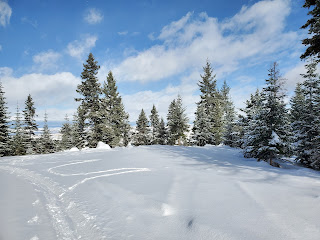 We check out the pond. It looks frozen enough to skate on, but we don't have the nerve to test it. I want to go further--I always want to go further--but A wants to go back, and so we head down the steep trails toward the ski area. Typically I scream down these in fear, but today in the powder, they are manageable. 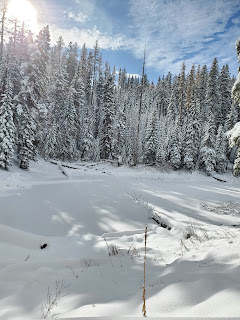 The next day I go out solo and break a longer trail. Any tracks are gone, polished by the wind, so I navigate by memory. There's a long climb, longer than I remember from running this route in summer. Did I really run up this steep hill? I guess so. I only feel confident about my route when I see the trail sign and start heading back toward the pond. A hunter has postholed in on an old ski track here, ruining it, but there is plenty of room to safely descend the big hill. I arrive wind-blown at the ski area, where a few die-hards are skinning up.

The next week, an odd storm will blow in, bringing 60 degrees and 80 mile an hour wind gusts. This hardens the snow into a gnarly crust, no good for skiing or snowshoeing. I try, get annoyed, and retreat. A friend texts: "Are you backpacking in Arizona this December?" No, I say. Even though I see friends traveling all over the place, it doesn't seem responsible right now. She isn't going either. "I hate this in between," she writes. I do too. The trails are icy, nowhere to run, the gym is closed, we wait for snow.