My covid bubble buddy and I struggled under the weight of our overnight gear and skis strapped to our backpacks. The promise of a pulk to haul in our stuff had not materialized when the pulk was not to be found. So we were hopelessly unbalanced and praying that the 3.5 miles into the forest guard station we had rented were not all uphill.
We had turned a lot of ideas over in our heads. Our original plan--to hike 100 miles of the Arizona Trail--wasn't looking so good. In the spirit of going where we could on one tank of gas, I perused recreation.gov for alternatives and found this sweet little cabin.
We arrived at the snow park to find that we couldn't quite drive to the snow park. Having paid for a snow park pass, I was annoyed by this, but the warm weather and lack of snow had contributed to icy ruts that were not navigable. Skiing didn't look so good either. Visions of having to snowshoe the whole way in, skis clanking overhead, went through my mind. Fortunately, about a mile into our slog the snow improved enough to ski. (If you haven't skied with a huge pack and snowshoes, you haven't yet experienced the balance and skill it took not to fall over.)
The guard station appeared on top of a large hill. It was three rooms, perched on top of a canyon. The setting was magnificent. In summer, you can drive here, and I imagine it is a busy place, but for the two days we stayed here we didn't see a soul. 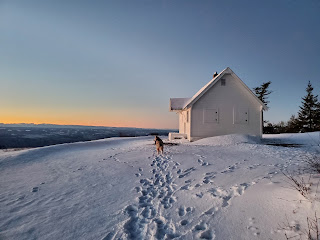 People don't know it, but these guard stations are a great getaway on the (relatively) cheap. We paid $100 for two nights, and that got us shelter with a propane heater and lights, much better than trying to camp in the bitter cold. We could melt snow for water on the stove and there was even a refrigerator (not that we needed it). We skied in both directions from the cabin and attempted to find the trail that went into the canyon. If there was more time, we could have done some long loops. 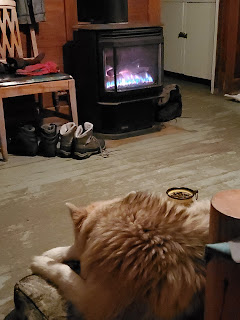 One of the days, it got warm enough that we dragged lawn chairs outside and sat in the sun. The snow wasn't perfect--in some places it had baked to an icy sheen, which challenged our ability. But we could see a hundred miles to the south, and the sunsets were a blaze of fire across the sky. 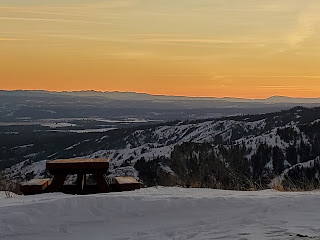 "I could easily stay another night," I said, perusing the contents of the cupboards. People had left soup, and, inexplicably, dry shampoo. I knew someone else was skiing in the next day, so occupying wouldn't work, but it didn't hurt to imagine staying forever. 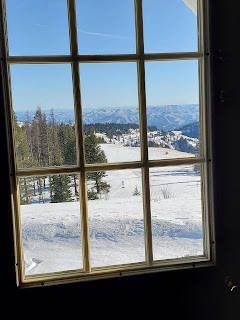 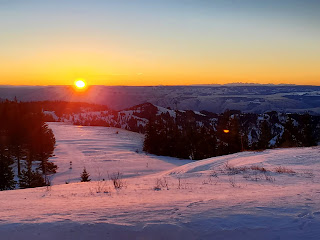