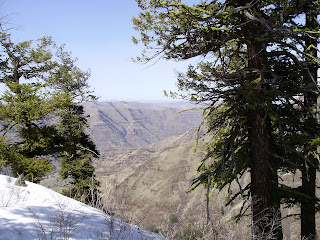 On Saturday I climbed up to Freezeout Saddle, which overlooks Hells Canyon. You start at Imnaha River, a name I like saying because I think it's pretty. Imnaha. A good name for a dog. Here is the beginning of the trail. 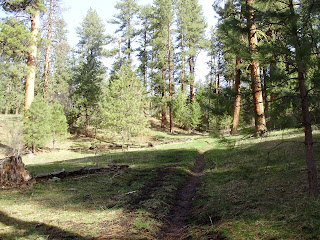 The trail passes through some beautiful large ponderosas. I love the smell of these forests. It is like being in a jar of vanilla. Everything was all green and springlike. After a bit the trees stop and you ascend the open slopes. Many switchbacks later I slogged to the saddle. There I saw this demoralizing sign: 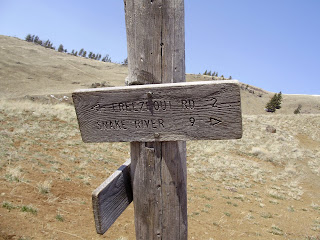 Two miles? No way! (Later I checked the guidebook. The sneaky Forest Service had redone the trail and it is actually 3.3 miles to the saddle). A chilly wind howled. I posed for a victory shot: 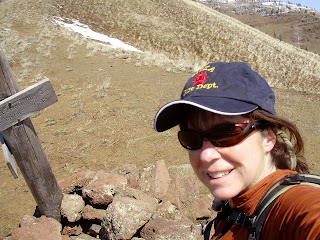 Fueled by the yummiest snack ever, I pushed on to the summit ridge, before snow drove me back. I postholed for a bit, but the wind was biting and the trail obscure. On the way down I encountered three backpackers who were heading, they said, for Hat Point. Good luck, buddy! I thought. Still winter up there. 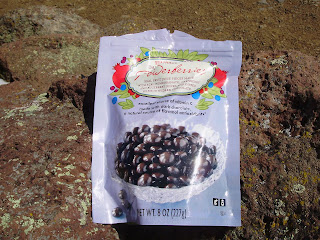 The trail continues from the saddle all the way to the Snake River. I peered over the edge, wishing as usual I had brought overnight gear. I could see a tantalizing bench in the distance, a wide expanse of green, before the trail dove off into the canyon. No worries, I’ll be back.
Posted by Mary at 2:19 PM