Socks and the City

I've just returned from a sprint visit to Washington DC for the National Wilderness Awards. I try to like DC, I do, because I hate to think that I am settling into a superior narrow-mindedness, one of those people who proclaim incessantly about how great their chosen town is and how they could never, ever live anywhere else. So there's this: I had some outstanding meals. The Mall is pretty cool. And I like the energy. There are lots of runners. And bikers. And walkers. I also learned a few things from my trip, so read on.

1. It is entirely possible to get lost in a building. In my case, the Agriculture behemoth, which has wings up the wazoo, a basement,a secret tunnel to the Whitten Building, a post office a supply store, cafeterias, lots of mysterious "Door Blocked From This Side" rooms, and no exits. I clomped along in my business attire feeling panicked and ridiculous, before I finally saw freedom.

2. Apparently, pants tucked into jeans are popular. I remember this trend when it came around the first time. I'm not sure it looks that great this time either.

3. DC women must have a high pain tolerance. There they were in spike heels, tip-tapping down the pavement. After a day of blisters I committed the ultimate faux pas: socks and tennis shoes with a skirt.

4. If you go in a federal building, you must show your ID a billion times, and the security guards aren't kidding around. Some spectators came for the ceremony who were not on the guest list, and the guards summoned me to vouch for them. I appeared ID-less, since I was ALREADY in the building and had passed through a dozen times pushing carts and carrying stuff. Nope. I couldn't vouch for them without an ID. Also, in the Ag building, you must show an ID just to get OUT of the cafeteria.

5. I must look like I have explosive residue on my hands, because at the airport the TSA guy made a beeline for me with his wand. However I wasn't selected to go into the xray undressing chamber, although they made a pilot do it.

8. I don't care how great a health club is, $15 for a day pass is so much that you feel obligated to stay in there a long time.

9. The sunset from the restaurant on the top floor of the Hotel Washington is pretty spectacular.

10. Whenever I walk by the White House, I feel sorry for the Obama kids. Such a great lawn and they can't even play on it. I also am seized with the desire to do something inappropriate when I walk by there, so have to hurry past just in case.

I am posting a picture of me with the Deputy Chief, the Chief and the Wilderness Director, mostly for the entertainment value. Not sure how this happened but we all look like escapees from a mental institution. This picture makes me giggle. 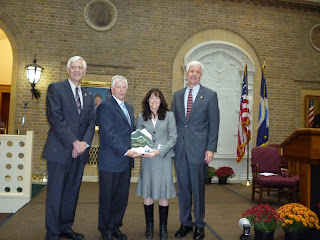