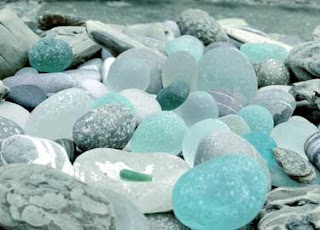 Marybeth and I lingered in the abandoned Ballard Place, sorting through the remains of a life. Perched on the ocean's edge, the house listed to one side. Rain lashed the empty places where window glass had been. The stairs were gone, the roof suspect. The forest was reclaiming the tracks where carts had been run to extract silver from adits. In the barn, an enormous generator would still turn over.

The house was full of practical things. Cans of food, bulging now from years of dampness and cold. Mouse-chewed wool clothes. But on the windowsill someone had placed a collection of beach glass. White, blue, amber--these jagged pieces were once utilitarian bottles, ordinary, not lovely. But years in the sea, pounded by waves, polished by sand, tumbling over and over in the current, had transformed them into translucent things of beauty.

Down by the skiff, Hans shifted his feet impatiently. "The tide waits for no woman!" he hollered, pushing the boat off the rapidly exposing beach. If we stayed too long, the flood tide would push into Klag Bay like a muscle and we would be stuck, unable to power through and back to our mothership.

But it was hard to leave the Ballard Place; I would visit it again and again over the next few years as a kayak ranger. Always I would sift through the sea glass. Sea glass meant renewal, reinvention. To someone who has reinvented her life time and again, I feel like a piece of sea glass. Once I was one thing, now I am another. I have washed up on one different beach after another.

I admit it: I took one small piece of sea glass from the windowsill of the Ballard Place. It was an impossible blue, the blue of a sunwashed sky, the blue of the eyes of someone I loved and lost. In all my moves I jettisoned many things but I never gave up that piece of glass. It was my link to the past.

A few months back, a woman from More Magazine called me. She wanted to profile me in an upcoming book about women who reinvented themselves. She knew I had left Alaska, and one of her questions was, "What do you do now to find adventure?"

I tripped over my words. It's true that my life isn't as wild as it once was, dodging coastal grizzlies on my training runs, spending days at sea in a kayak. I felt like I had to defend my new life, even though it paled in comparison to the one I used to have. A sliver of doubt needled its way into my skin. Have I made a huge mistake?

It's all about tradeoffs. As a firefighter in Florida, we were on the line twelve months of the year. You were always leaving someone behind, collateral damage. As a ranger, out in the field week after week, you couldn't know the community, volunteer, spend time with non-ranger friends. I gave up a lot for that way of life, and yes, sometimes I miss it.

It's also an adventure to stay, I am finding. Not the heart-pounding adrenaline rush kind, but as a person living that way, I was impossible to live with. This adventure is in letting people in through the walls you have built up, letting yourself believe you will not have to say goodbye. It's just as difficult sometimes, and just as rewarding. I am turning into someone else; the adventure is in the finding out. 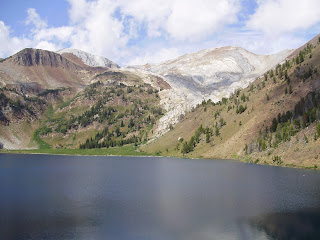