Who notices a swamper?

The sawyers get all the glory. They strut along with a 24 pound chainsaw over their shoulder, chaps on their legs, chips flying as they cut. Who notices a swamper? There you are, scurrying along hefting a 21 pound dolmar sloshing with gas and oil in one hand, a pulaski in the other, a handsaw shoved into your pack. You are the one who picks up the rounds and heaves them into the brush. The one who watches for barber chairs or trees twisting uncertainly in the wind. The one who is bent over clearing the trail of branches.

Who notices a swamper? You are the clean-up crew, not the one admired for the perfect row of holding wood, the clean cut of the saw. You are the satellite, the moon around a planet.

I used to be a sawyer. I roamed the Florida woods cutting down fire-roasted trees and upstart invasives, just me and a saw. But like a lot of things I've left behind, cutting is one of them. It takes practice to keep a saw steady, to judge a lean, to not screw up. Mostly, I'm okay with swamping, if I don't think too hard about what I've lost.

John and I hurried up the Bearwallow trail, scorched in last year's fire gone bad. We had heard terrifying reports of winter-fallen trees, stacked like matchsticks, impossible, impassible. We carried wedges, a falling axe. We were prepared for battle.

Only.. a chainsaw vigilante had arrived before us. Disregarding the prohibition of chainsaws in wilderness, this person had marched right past the wilderness boundary at 3.5 miles and cut all the way to the Standley Cabin, 5 miles in. Here is not the place for a treatise on wilderness trails and chainsaws, I have heard all the arguments for and against. What was disturbing was the callous disregard for the boundary line. We had two trail crew people behind us armed with crosscuts and bowsaws, to do it right. Young guys who aren't afraid of work, who have learned the importance of a traditional tool and the pride in cutting something out by hand. 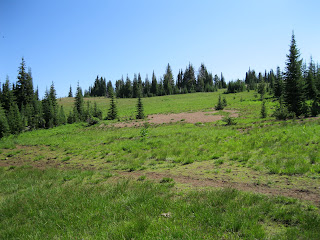 John and I stopped at the cabin, formerly a fire lookout's residence, to fill our water bottles from the spring. We returned to our cache of tools at the wilderness boundary. Just before it a tree leaned dangerously, flirting with the ground, a head-thumper. John took the pulaski and chopped it out by hand. Golden chips flew around. I grabbed sections of tree and pushed them off the trail. This, we thought, is how it's done. How it's been done for hundreds of years. Feeling the tree resist then crack under our tools.

Who notices a swamper? Maybe nobody. Who cares if the trail has been cut out by hand or by machine? Maybe not the hikers, the trail runners, the horse people who only want to get somewhere and don't think about lifting a hand to help. Maybe nobody. But I do. I notice. I care.