cross country, or how we went on a deeply annoying, severely frustrating adventure and somehow stayed married

I have a love-hate relationship with off-trail travel. Sometimes it is seamless, an easy climb up granite to reach a hidden lake. Two off-trail hikes loom large in my memory as spectacular, one a talus scramble up a mountain unstable as Grape Nuts to peer breathlessly at a wilderness ranger grail: an enormous lake so remote that there were no fire rings to clean up, no trash to pack out. Another time, in Southeast Alaska, a girl named Amelia and I zigzagged through brushy cedar and treacherous rock outcrops to stand above a lake frozen in mid-July. So yes, I can say I love off trail travel.

Sometimes I hate it too. Case in point, Warm Lake. I have seen it on maps and daydreamed. Warm Lake. Warm Lake. Could it be? Could this lake possibly be..a hot springs lake? Nobody I questioned knew, which should have sent up some serious crimson flags, but didn't.  I was consumed with the vision of a rockrimmed hot springs pond. What if, I thought, What if?

J was game for the adventure but as we struck out into an old burn, flinging our bodies over deadfall and squelching through questionable boggy spots, he asked if I was sure about this. "I'm not ready to turn back yet!" I answered blithely. How bad could it be? The map showed the lake only a mile and a half from the road, for Pete's sake.

Two hours later we dragged ourselves to a vantage point. Unfortunately I had worn shorts, and also unfortunately I have the habit of banging into every stob and branch there is. Several scrape marks decorated my legs. Streaks of black from burned logs completed the look. But my breath caught. There it was--the lake! A few hundred feet below, it glimmered seductively.

"It doesn't look that bad," I said tentatively. J looked concerned, but he knows me by now and figured I wouldn't be satisfied until I swam in the hot springs lake. We picked our way through scratchy brush, more tedious deadfall, bees and tiny trees repopulating the burn to emerge on the (swampy, impassible) shores of Warm Lake. Our feet teetered on a floating mat of vegetation. We paused, uncertain.

"We should put on our sandals and head for those rocks," J suggested. Neither of us wanted to negotiate the deadfall again and besides, that side might be better for swimming. Slowly we slogged along until something went horribly wrong. I took a step and began to sink in bottomless mud.

"I'm in quicksand!" I screamed. I sank further.

To his credit, J came to the rescue, even when my sandal was sucked off my foot and I had to execute a tricky maneuver to save it from disappearing forever. He did feel compelled to say, however, "Well, it isn't really quicksand. It's mud without a bottom."

I could have done without this remark, but I was so grateful to be released that I only slogged along, now muddy and out of sorts. Gradually I became aware that the water under my feet was not only decidedly not warm, but was very cold. Warm Lake indeed!

After a brushy and curse-inducing detour through a brush patch, we stopped at the rocks and regrouped. Swimming was out. We had hoped to continue our cross country adventure with a trip to nearby Frances Lake. The map showed it only 200 feet higher and less than a quarter mile away. We looked up. Deadfall. We looked at each other. I looked at my watch. Three. Sadly we decided to retreat.

The hike back was, if possible, worse than the way in. In an effort to stay out of the deadfall we climbed the rocks, climbed down the rocks, and up again. But the deadfall and brush were pervasive, the result of a stand-replacing wildfire ten years earlier. It was unavoidable.

Whiny Girl made a brief but show-stopping appearance. I hadn't seen her in several months, but there she was, her pace slow, stopping to sit on logs and complain. In the last half mile, hunters watched us curiously from the campground, only their stares preventing a full scale tantrum. 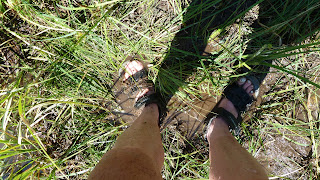 I can't say that anything about this hike was fun. I have new gashes on my legs, got caught in mud with no bottom, discovered stinging nettles, did not get to swim in a hot springs, or any springs, didn't have enough food, and let myself down by whining. On the bright side though, we didn't scream at each other like the couple I saw on the trail a few months ago ("Take it easy, I'm carrying a LOT OF WEIGHT!") and we made it back to the car without throwing each other over a cliff.  That's what it's all about!
Posted by Mary at 6:03 PM