Forty Miles of the Minam

I lay in my tent hearing an unfamiliar sound, the light finger-tap of rain on the fly. I have grown accustomed to sunshine and packing up a wet tent and the on and off dance of rain gear is not as smooth as it was in the rainforest. (Crap! It's raining harder! Put on rain jacket! Rain pants! Pack cover! Five minutes later: Crap! It's not raining and I'm hot! Take off everything! Repeat.)

Over across Frazier Meadows, a light glowed in the elk hunters' wall tent. They had come in late the night before and I had not seen them. In thirty-two miles of walking I had in only seen three people, my friends who were caretaking Red's Horse Ranch and a woman riding a horse up from a private inholding. It was fall on the Minam.

Fall on the Minam and the landscape reflected the season in subtle ways. The grouseberry was turning yellow, the grasses amber. The light slanted in a different way, softer. The river was low and harmless. The whole place looked as if it had been painted with a smudged finger, more like a dream than real trees and water.

Fall on the Minam and I felt like the last person on the trail, completely alone but self-sufficient, carrying everything I needed.

Hovering all of it was winter, its presence an unseen thing, real only by feel and touch. Soon this rain will be snow. Soon this river will be ice. I feel an urgency to see it all, do it all, before winter comes, slamming the gate to the mountains shut. You can still go there, but it is different, tinged with the deep ache of cold and the fear of avalanche.

On the day before I had backpacked 25 miles, wanting to get out of the river corridor and up to some alpine views.  There were some perfectly acceptable river campsites, but something drove me on. I was reminded of my marathon running days. Before them, my long run was only six miles. It was amazing to see what the body can actually do when asked. Soon a sixteen mile run became short. I am the first to say that I am not an exceptional athlete. Plenty of people run and hike more than I do. But there are a lot of people who don't ask enough of their bodies. They might be surprised at what they can do.

Two miles from the trailhead I encountered a white-haired man, probably in his late seventies, dressed in camo and toting a bow. When I told him I hadn't seen any elk, he grinned cheerfully.

"Oh well, I'm old and I'm just tottering up the trail," he said.

Later that day, after a shower and pasta, J shook his head when I told him I had backpacked 25 miles in one day.

"Normal people don't do that," he said.

Maybe. But who wants to be normal? 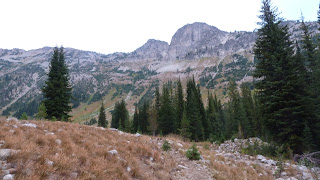