Too cold for shorts

A long time ago, in a universe far away, I worked for a man who hated wearing long pants. Especially our fashion forward green Forest Service pants, which rise to a high waist and do not look good on anyone. This man would grimly hang in there in shorts while the rest of us gave in, shivering in the frosty mornings. Once he put on his pants, you knew that summer was indeed over. 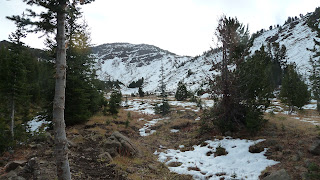 Today this man is fighting for his life and would probably give anything to even have the chance to walk in the woods in pants or shorts. I thought of him as I hurried towards McCully Basin, the victim of a bad clothing choice. It's here, that downturn, the end of shorts.

Just last week I was able to stay warm in shorts, but there has been a subtle shift that should warn the unprepared and the foolish. The larches are in full, glorious color now. The sky spits snow on the passes. No longer can I get by on a 12 mile hike with just water and a long underwear top. 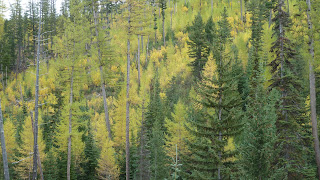 Still, I kept going, wanting to get as high as I could before the weather turned me around. From the yurt location I could hear chopping, the outfitter getting ready for the ski season, laying in wood. The campsites were bleak and lonely, the pass I sat on just a month ago layered in snow.

Pants don't let you move the same way shorts do. Even running tights feel faintly and constrictive. And long underwear under shorts, while it gets the job done, feels faintly ridiculous. After a season of bare legs, it's hard to make the transition. 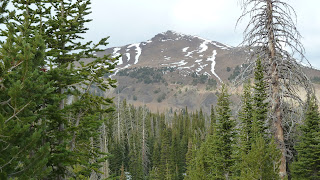 The wind picks up at the top of the basin and it is time to go. I race down the steep hill, running to stay warm. I think of my former boss, a man so fast in the woods that we had to run to keep up with his walking pace. I hope when spring comes around he can put his shorts back on and keep them on, for as long as he wants.
Posted by Mary at 3:46 PM