It was an eerie feeling, leaving Muir Trail Ranch. We had 107 miles to go, and we felt as though we were truly entering the hundred mile wilderness. From here on, to leave the trail we would have to hike for a day, maybe more, over passes and down to remote trailheads. There was really only one way out, and that was over Mount Whitney.

Not that we wanted to leave the trail, but there was still a flicker of unease as I hiked among the ponderosas, the air smelling like vanilla. Would my body hold up to the next nine days ahead? We were now getting into the high and wild section of the trail where there would be a pass nearly every day, some scraping the sky at 13,000 feet. So far, all our gear and our bodies had held up, but to some extent we were all walking wounded. Two of us sported blisters that marched all across both little toes. The ultra-light packs that I had envied so much at the beginning were turning into a liability, causing their wearers nerve and back pain. Some people had dropped out at MTR and earlier, our ranks dwindling as the miles added up. 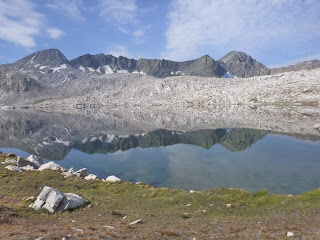 As I hiked across the steel bridge and into Sequoia National Park, the dank smell of chinquapin brought back memories of working here as a seasonal biological technician. In those days, life had seemed so long and possibilities endless. Move from one seasonal park job to the next, an endless flowing river. I was lost in my thoughts as we climbed up to Evolution Valley, but not so lost that I didn't notice tiny sprinkles of rain.

It was obvious that the weather was changing. The bright progression of sunny days was coming to an end. Thunder muttered in the distance as we slogged up the final switchbacks to 10,400' Evolution Lake. From there we could see an enormous storm in the distance, deep-bellied black clouds rolling toward us.

"Where are some campsites!" I hollered to a man who was loitering around, and he showed us some small places carved out from granite. I struggled to set up my tent in the wind, and its limitations immediately became known. Anchoring it with rocks, I dove in and hoped for the best.

Storms bring out the best clouds and sunsets, though, and we were able to emerge later to take in our surroundings. The sun set in a golden pool behind our campsite, and a rainbow arched from sky to water. That next morning against a dark sky the crescent moon was bracketed by two planets.

Living above ten thousand feet was extreme and close to the edge. The clouds billowed right at our shoulders it seemed as we climbed Muir and Pinchot passes. We set up our tents near lakes that are frozen a good part of the year, and went higher still through what looked like moonscapes. Lightning forked the sky and hail peppered the ground as we ducked for cover among small, nameless tarns. I felt exposed and small under a huge sky, but also vividly alive in a way I haven't felt for awhile.

We were getting so used to gaining elevation that if a pass was a thousand feet above us, we said, "Oh, it's only a thousand feet." Even the dreaded Golden Staircase, a grind of 1500 feet before we reached Palisade Lakes, seemed easy. I felt that this was what I was meant to do; I seemed to get stronger with every pass.

At Palisade Lake under a grey sky, we sat on a big rock and people surrounded us like satellites. It was a social gathering in the middle of the wilderness. First two older guys marched over with tea and a chocolate energy bar. Then two solo hikers showed up and pitched their tents close to us. They were both fastpackers, but the nice variety, the ones who loved hiking alone but liked some company at night (I could definitely relate to that). We talked about gear, routes, and the weather, an omnipresent threat now that we were so high. Light rain sprinkled the sky. The next day we had Mather Pass, then Glen and the big daddy, Forester. The passes were stacked up in front of us. All we had to do was climb them.

Eye Candy carefully set up his tiny tarp. If a huge storm came up, he was sunk, but he was making good time, going northbound in half the time it was taking us. We had watched in appreciation earlier as he had gone down to the lake to rinse off. While I appreciated the view, he was just another passing story, someone we would never see again. 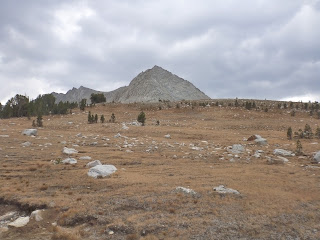 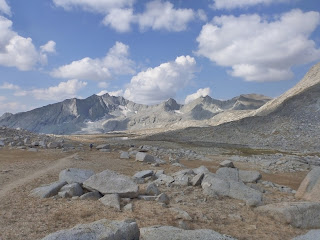 The coming days would challenge us even more; our camp at Lake Marjorie, at 11,000 feet, was both beautiful and stark, with torrential rain that cleared up to a foggy landscape. It was August but fall was already in the air. I could smell it and taste it; this country didn't have long before winter would close in. We scurried through the exposed rock like the pikas. Sometimes it felt like we didn't even belong up here; that only a thin shell of nylon kept us from certain disaster. 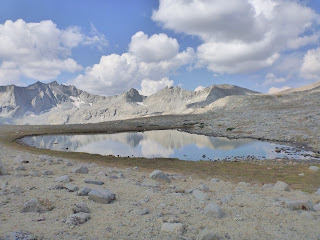 There were other times though when it felt like this was the only place I belonged.