Headlamps like scattered stars blinked in the inky blackness around Guitar Lake. The air pulsed with apprehension and excitement. I packed my bag for the last time. This was it, the last day in a string of nineteen. The trip, a trip of a lifetime, because when again will I be able to have this many days free, was coming to an end. I have a hard time with endings. 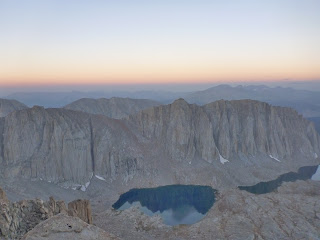 Today I would climb through the darkness, my headlamp a small circle of light illuminating the rocky switchbacks, until the sky cleared enough for me to see the black pools of lakes beneath me and the cloud cap over Mount Whitney, several thousand feet above.

I would pause at the trail junction, considering. I had been to Mount Whitney before, and the two mile hike up was steep and fog-shrouded. In the end I would go, shivering in the complete white-out, mountain dropping off beneath my feet, higher than anyone else in the lower 48 at eight in the morning. 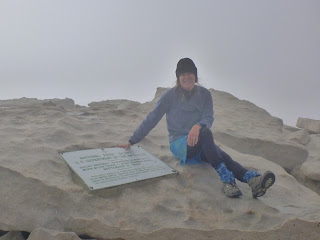 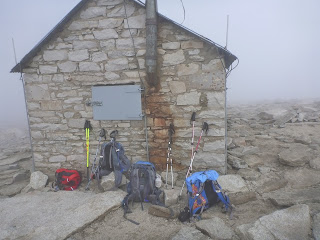 I would descend six thousand feet, my shin throbbing with what I would later diagnose as overuse but what seemed so painful at the time that I could barely take in my surroundings until massive doses of Vitamin I took effect. 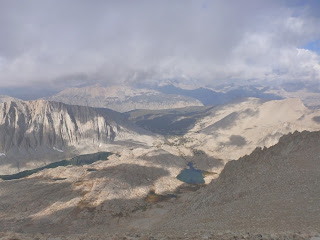 As the endless switchbacks looped through the forest and day hikers came into view, the inevitable change would occur. The whole day would switch just like that. Cars, roads, people, all the things I go into the wilderness to escape would be waiting for us at Whitney Portal. We would hang our packs on the scale and take pictures. Toss our trash, hang our tents out behind the Dow Villa motel. Eat enormous quantities of Mexican food and ice cream. We would be done. 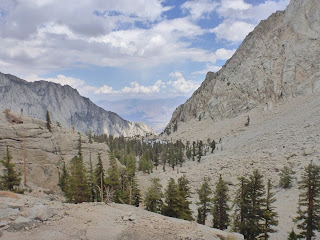 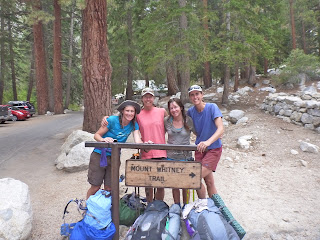 The next day we would drive under the shadow of the Sierras. I would  look up at the crest as it took us minutes to drive by what had taken days to hike. There would be many things to think about during the two day drive home. Can a trip change your life? I think so.
Posted by Mary at 9:31 AM