The Bear in the Woods

Something happened in my former town that I can't stop thinking about. It is not my story to tell; I don't live there anymore. You can read more details here. Basically there is this: a man is dead, perhaps waiting it out for rescue in a remote cove by a fire on the beach, signs of a struggle, a trail to a cache of his partially eaten remains, a sow and cubs aggressively defending it.

This was my fear every time I went to sleep in my tent somewhere in the Alaska wilderness, which was just about every week in summer due to my job as a kayak ranger. I would lie there, cold rain pattering on the slim nylon walls, cold steel of a rifle beside me, headlamp and pepper spray close at hand. It was a fear I never really got over, even after seeing hundreds of bears in the seven years that I lived there. They walked right by the tent, past us on the trails, and up the streams. Sometimes we saw them swimming. I hung around bear hunting guides and their clients, even though I wasn't fond of that type of "harvest", just to learn more about bears and their habits.

In all that time only two bears acted strangely. Once a bear stalked between us and our kayaks, causing us to crouch in the woods waiting him out. The other time a sow with cubs charged us, growling, standing up, circling, our mauling almost a certainty except that we had five people in our group, enough to give her pause.

Here in a tamer place, there are no grizzlies. Black bears are rare sights. People fret over wolves and mountain lions. I don't really think about them. It has always been bears that haunted my dreams.

What we fear is a strangely personal thing. I have a friend who is deathly afraid of thunderstorms. Another, of heights. I can argue all day long that it is only low cloud cover, only exposure, but they are not convinced. I am the same way with bears. After seven years I achieved a certain level of comfort: I ran the trails alone, day hiked alone, but could never camp alone, not once.

Nobody will ever know what happened on that beach. I want to believe that a mistake was made, something preventable, but I know that sometimes in the wilderness things just strike back. If we want safety the answer isn't just to shoot all the wolves. It's to stay home. 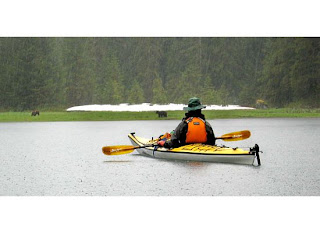