The physical therapist eyed me critically. "You're...crooked," he said. "One leg is 3/8 of an inch longer than the other. Your body has really been compressed as a result of trauma."

A year after my trail running fall, I had suspected as much, but a $200 doctor visit had yielded only this: "Maybe don't run so much." I had to fight to be referred to PT, and now everything made sense. The band of pain when standing, low in my back. An ache when I ran, deep in the muscle. And this: just an indescribable feeling of imbalance, as if the way I walked through the world was no longer right.

There's also other types of imbalance, the kind that can be cured by spending a night on the high trail. This trail winds like a belt around the middle of Hells Canyon, passing through sweet benches that soar over empty space and abandoned pieces of homesteads. It is remote and wind-swept and peppered with flowers. We saw one pack string in twenty-four hours, even though it is gloriously spring in the canyon, seventy degrees as we lay on our thermarests taking in the view.

This is the third time that I've climbed up and over Freezeout Saddle and I have to say I am ready to hike somewhere else, but the canyon doesn't let you in easily. You have to want to go there enough to trudge slowly upwards, plunge downwards on rocks like marbles, and do it all over again the next day. 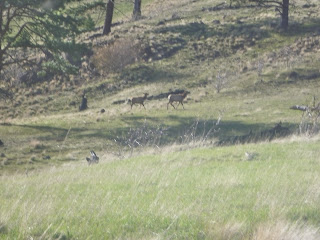 My physical imbalance seems to be cured, although the PT warned me that my body had gotten used to working with the way it was, and it might take some time for it to adjust. The other imbalance? It's temporarily cured; a weekend outside does it for a little while. but not for long.