It's happening, peeps! Here is a little update.

First, I am trying out some Brooks Cascadias. I have to laugh because in every endeavor, the cool kids wear the same stuff and long hikes are no different. Most thru-hikers wear these shoes. I was all set with my Merrells, but on my last backpack they sort of tore up my feet, so this is an option. I will decide after a few backpack trips this summer. These are my target socks also, unless I go with the Ininji option. 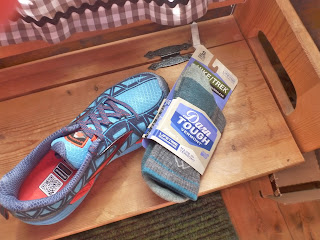 I'm still fiddling with backpack and sleeping quilt options but the rest of my gear is pretty much set. Maybe I should have started up a Kickstarter campaign? I've spent more money on gear lately than groceries. Speaking of which...

My friend surprised me with a gift for the trail. Check it out! It's powdered chocolate and peanut butter!!! I haven't tried it yet, but with my two favorite things in it, how could it be bad? 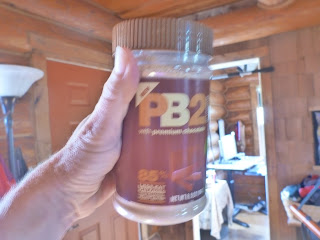 What I won't be carrying? Protein bars, the sight of which still make me want to vomit. No Goldfish. No cereal. What I will be carrying: Yogurt-covered pretzels, which taste horrible in real life but great on the trail. Snickers, same thing. Tortillas, tuna, peanut butter. And peanut butter/chocolate powder!

Training:
I have seen people crash and burn on long hikes and it's because they haven't done the work, boots (shoes) on the ground.  I've been doing some long day hikes and backpacking trips so I don't collapse in a heap on Day 1.
Company:

The group keeps shifting in size. Right now we may have four people for the first 74 miles, maybe 3 after that to Stehekin, and the two amigos for the last. As I've mentioned, the right people can make or break a hike like this. Nobody wants to slog along miserably for three hundred miles with incompatible people. I don't think that will be the case with this group. I just need to keep my crazy under control (No, my trail name will not be Races Out of Camp or Crankypants. At least, I hope not!) because I am so used to solo travel and doing what I feel like doing at all times. Compromise. I do plan on a few early morning solo hikes, though, and meeting up with the group later. Solo hiking = Novels written, life decisions made.

When we know when people will leave and get on the trail, we can nail down our resupply. So far it looks like two: Stehekin (a 100 mile food carry) and Stevens Pass (a 74 mile food carry). Brutal! Hopefully we can yogi* some food from day hikers if we need it.

Ever planned an adventure this far ahead? What would you carry for food if you were me? Anyone ever hiked in Cascadias?

*Yogi: lingering shamelessly and looking hungry while others are eating. I honed this to perfection as a wilderness ranger when I was always on the edge of starvation. Hope I can remember how to do it.