Why this place is called Cemetery Ridge is a mystery.  Are there graves up there? I pore over the map with its historic post offices and mines. There were post offices all over Hells Canyon country, in the middle of what seems like nowhere now. Many of the old stories are gone now. 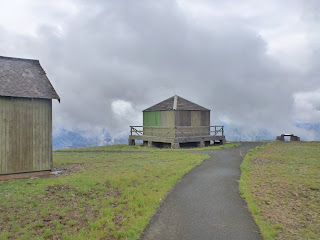 Opportunistically, I had to drop off some bike riders here. This is the old Buckhorn Lookout, so high above the canyon that the cabin sat on the ground. Now it is home only to wind and packrats. 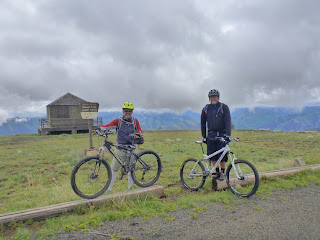 These guys were planning an epic one way run to Cow Creek far below. Since my mountain bike skills are not that advanced, I seized the opportunity to walk out a high ridge where I had never been. 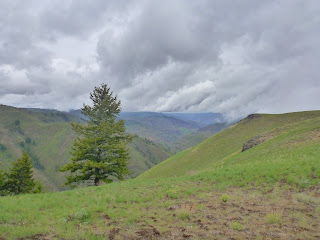 It was a cold and blustery day, far removed from the 80 degrees we enjoyed last week. But in many ways it was the perfect weather to walk back into time. 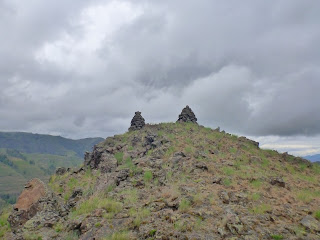 A fire last summer has changed this trail and it is hard to find in places. Easy to charge up the old dozer line instead of finding the faint track with burnt trees draped across. Which is what I did, only to see the real trail far below. I descended through brush and fallen trees to reach it.


The trail was only a suggestion once I left the old roadbed, which was a mystery in itself. Who would build a road sketching along the side of a ridge, and why did it just stop? The roadbed itself is fading into history. Very few people walk this ridge. Soon it will be gone. These lonely cairns mark a survey point, someone long ago putting a lot of effort into it. 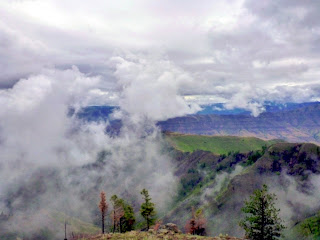 The clouds were a ragged curtain, teasing me with glimpses of the Snake River far below. The farther I walked the more I felt like I would turn a corner and walk into a hundred years ago. I bet it felt just this high and lonesome back then. 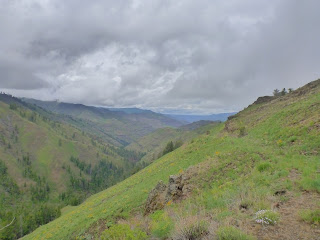 Of course there was nobody around. That just added to the feeling of being caught in between present and past. 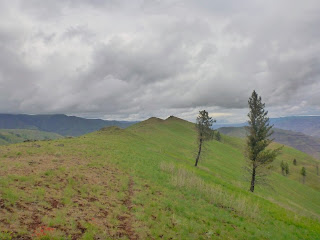 Eventually the trail faded out to nothing. I could see where it probably used to go, dropping off a spur ridge and heading towards the saddle. If a person had all the time in the world, she could keep going, fall off the end of the world on another forgotten trail to Salmon Bar.

It's always like that in the canyon breaks. It hurts to turn around. It feels as though you slide into another world where time and space don't matter. Where you could just keep walking as long as you felt like it. Keep walking until you turned into the canyon itself.

I try every time to describe what this canyon means to me and I never quite get it right. For a time it reminded me of a boomerang relationship I had with a smokejumper who could never make up his mind. Used to falling from the sky, he did not know why he could not have everything he wanted, including a girlfriend in McCall and one in Florida. "Why are you even with him?" Kathie used to ask as we breathlessly lifted weights, trying to make ourselves bigger in a firefighting world that mostly belonged to men. I never had an answer. For a time I thought the canyon and I were like that. I come back beat up, exhausted, out of water, but I always go back.

But it's so much more than that. 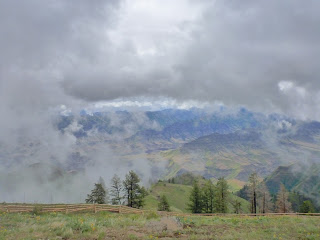 I'm sure all of us have places like this. Places that make our hearts hurt and soar at the same time. Places that aren't easy or comfortable, where you are on an invisible edge. Places you keep coming back to, a boomerang that won't stop.