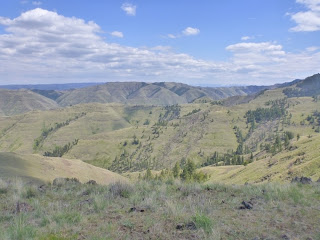 Sometimes I really miss working with my hands. I miss the kind of job that had meaning: I clear trails. I fight fires. I'm a wilderness ranger, a tree planter. No matter that those jobs were sometimes pursued blindly for the wrong reasons; for example sweating to save a patch of ground that would  have been better off had it burned, or the endless Groundhog Day of picking up the same trash left by different backpackers season after season. I liked it when two week vacationers approached me and said: I want your job. Thank you for what you do. I wish I would have. I wish I could.

I can't deny that now I am an office worker. Granted, my office is a log cabin I own, and sometimes my deck outdoors. I travel, sometimes, for work. I get to plan recreation projects. My hours are flexible. It's not terrible, as jobs go. But it lacks that direct connection to the land. That is what I miss, the look of a working waterbar, a tree sawed and chopped and pushed off the trail, a lake restored, a tree planted.

I think that's why I become so obsessive about my weekends. I want to combat that feeling of it's not enough. The older I get, the less time I know I have on this earth, the more I want to spend outdoors in it. Maybe not at the whim of the Man, beating up my knees and my back and my hands for a government project, but for myself. To feel that great invisible heartbeat of the land beneath my toes.

I hike up Rowley Gulch solo, because it is hard to find outdoors companions the older you get, too. I am lucky to have a handful of friends who will go, sometimes, but they have other things going on and to be honest, I sometimes feel I drag them up hills they would rather not climb. That maybe a shorter hike is enough. Sometimes I wish it were enough for me too, that what drives me would slow down.

But when I top out on the summit ridge, I am glad that what drives me kept a steady pace up the punishing switchbacks of the unmaintained route, barely a trail these days now that budgets have been slashed. It has been years since a crew labored in this place. The view is worth it, canyons dropping away in great immense folds.  It is a place to catch your breath, from the climb and the surprise of it all. 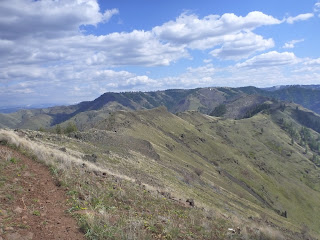 Used to silence and the empty trail curving for miles, I am surprised to  meet a packer headed for Dug Bar. I ask him if anyone is camped up ahead. "Dropped a camp at the Palace," he says, obviously believing I know this ground. "But the upper camp is open."

The only water is at Deep Creek and so I continue on. The upper camp is a mess. Horses have been tied to trees too long, and the trees will soon die. Toilet paper dots the bushes. Camping near others is enticing since I so often don't, but as I listen the whine of a chainsaw, illegal in wilderness, wafts from below. That settles it--I need to move on.

Water is the defining factor in the canyon and it is dry from here for miles. I will have to drop down from Fingerboard Saddle, an uncontrolled slide of rocks and eroded dirt. I will hike on to an abandoned ranch, now owned by the Forest Service. It will be a tough fifteen mile day, because as I have noted before, fifteen miles in the canyon is like thirty anywhere else. 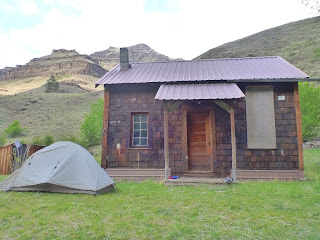 I will sit on the rough boards of the cabin porch, wondering who once lived here, so far from a paved road. My feet will throb from hot spots. I will hobble to the spigot, still working, and pour water over my head in an improvised shower. I will think: this is enough.
Posted by Mary at 6:09 AM