solo in the honeymoon suite: thoughts on taking the independence road

When I was still holding out in the seasonal worker trenches, we all knew there were two kinds of people: those who went and those who stayed. The ones who wintered over after their seasons were done, falling in love with a place or a person, and the ones like me, who moved on, every six months. It wasn't that I didn't love each place I lived, or the people I met there. There were times I almost stayed. But in the end, there were so many places to go. I didn't want to miss out. After all, the old place would always be there when I chose to return. What I didn't realize was how big of a gap there would be between those who went and those who stayed.

The ones who stayed sent roots down deep. They were part of the place in a way I could never be. At the same time, I never believed in permanence. After all, I saw how things changed by being in the mountains every day. There were avalanches and microbursts. Tides. The Ring of Fire. Wildfires like the Yellowstone fires of 1988. People vanished too, into the ocean and off the mountains. Always I learned to distrust permanence.

That's not to say that I didn't throw myself wholeheartedly into each new endeavor or relationship, but always I kept a piece of my wandering soul tucked away. I thought: if the worst happens, I won't crumble like a late-fall leaf. I'll always have somewhere to go.

I thought about all this a lot this week when I went to a tiny island where my life took a U turn. Here was where I decided to step off a straight path and veer into the unknown, taking jobs like fighting fires and trail work. This is one of those places, of many, where I could have stayed, but I chose to go. 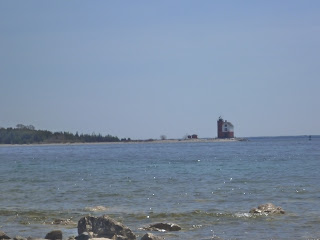 Many of the people I knew then are gone, moved away or taken from the world too early. I had come by myself and the questions, questions I don't hear out west, were surprising.

"Who are you here with?" asks a man I have just met at a party. "So, you just travel around the country alone?" the woman at the place where I am staying (in the Honeymoon Suite, no less) asks. I forget that things are not the same back east as they are in the restless west, where I see strong, capable women out climbing, hiking, traveling alone all the time. 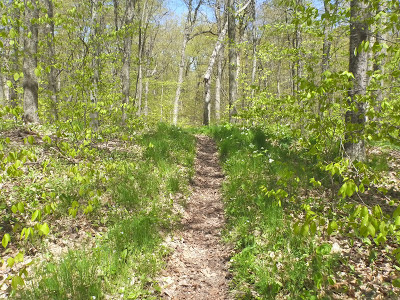 It is a bittersweet walk down memory lane, because I know that I don't belong here. There was a time when I wanted to, more than anything, but my itchy feet took me away. Now I can't imagine living here, bounded by water, where I couldn't walk twenty miles in a straight line, where there are no mountains.

I head for the trails, and here is one thing that was absolutely the same. Back in my twenties, these trails seemed to go on forever, and now they seem strangely short. But they are deserted and beautiful and I love them. I run and run and my back doesn't hurt, not one bit.

For years I thought about what would have happened if I had crossed the gap to be one of the people who stayed, not only here but at a dozen other places fringing the national parks where I worked. But this weekend I realized it's time to let go of those balloons and let them fly away. 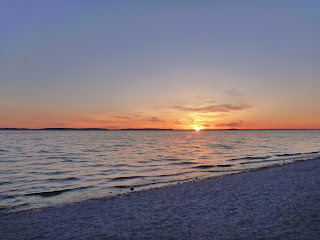 At the same party, I was feeling a little out of place in  a sea of couples. Then I asked one of the women where she lived. She named the town and thought for a minute. Then she said, "But there are so many other places to live."