The Men I Left Behind, Part Two

Well, since we seem to be caught in a spin cycle of rain and wind, unusual weather for here, you don't get a What I Did This Weekend post. I don't camp in the rain if I can help it anymore, and before you judge, a few words: Southeast Alaska. Rain Forest. Kayak Ranger job. I've camped in the rain more than most people ever will. Since the rain has put a damper (ha. Ha.) on my outdoor activities, and since my two year wedding anniversary is coming up, I thought I would ponder something a little different.

I just read a post my friend Katey wrote about the three Ps--partner, position and place. I'm stealing her thought because I am sure she won't mind. I've had the places all right, and if you count breathing in wildfire smoke, paddling in big swells off the Alaskan coast, and slinging a misery whip through a million dead trees as perfect and good (and I do) I've had the positions. But mostly because of my relentless traveling, I never really had the partner. Until now.

Mostly, the guys I met were the kind who wanted to tame. Claiming they wanted someone independent at the beginning, they changed their tune to a more traditional one as time wore on. I knew from the very start of my dating life that I never wanted the mindset of someone to "complete me". I'm complete already. I didn't want to be half of a whole. For me, it works best when there are two individuals, perfectly capable of navigating the world on their own, who choose to be together, support the other, cheer them on, but have their own really full and interesting lives too. That can mean that you go away to hike 300 miles of the PCT if that is what you want to do, and it is not a threat or an abandonment to the other person, who misses you but can handle life just fine when you are gone. (The other person may, theoretically, then plan a three week skiing trip in the Wrangell Mountains in the spring.)

Okay, I take that back. I used to think that I wanted one of those stick like glue partners for my outdoors activities. Wouldn't it be great, I thought, standing alone yet again on the edge of a big river, if I found someone who would be my constant companion in the things I liked to do, always and forever? But that dream didn't last for long. I like the occasional intersection of adventures, but not the always together part. I have my girlfriends, and sometimes just myself, for that. I learn so much from being separate at those times.

The last person I dated before meeting my husband wanted someone just like him, joined at the hip. At times I felt I was suffocating. Reading through a now infamous list of qualities he wanted in a person (qualities I did not possess) I felt a dawning sense of horror. He was describing himself! I know enough about myself to know that marrying someone just like myself would be a very, very bad idea. I read in a book by Gabrielle Reece (which I don't recommend reading unless you want to read banal advice by a celebrity about how to live your life. Sample: men leave for younger women because the wives stop paying attention to the husband) a very good description of the way my husband is: San Diego. Seventy five degrees and sunny. Whereas I? Am sometimes rainy. Sometimes sunny. Sometimes thunderstorms are in the forecast! See what I mean? Two of me? No. No.

I have to admit that there are times when I wish I had met my husband before I had kissed so many frogs and had my heart broken so many times. I will never get fifty years with him. At the same time, it was worth the wait. Happy anniversary to me! (Wait, Us! Ha ha.) 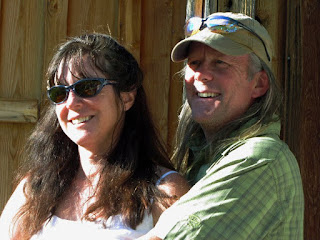