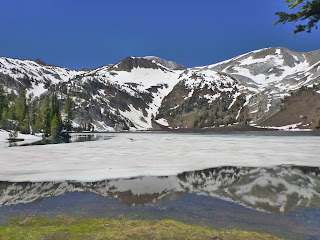 I trudged up the switchbacks towards Ice Lake, feeling the bonk trifecta: not enough food, too much heat, hauling weight atelevation. Usually this hike is easy for me, a mere eight miles and something like 2,500 feet to climb, and I have done this as a simple day hike. Today I was hauling a backpack and nothing was going right. I worried: I work hard so that today will not be that day. You know, the day when you realize you can't do what you have done before. Was today that day?

I paused in the basin where I had been turned back a month ago. All the snow had vanished. The trees were still there, though, many-limbed behemoths that I had to crawl over and under, trees that will never be cut this season due to sequestration.

When I gulped down an entire half liter of Gatorade and an uncountable amount of Oreos at my one break, I knew I had not adequately fueled and hydrated on this unseasonably warm day. Feeling better and relieved, I charged up the remaining two miles to the lake, finding it still partially frozen. Today was definitely not that day. 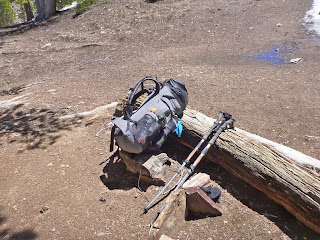 Crossing a shaky set of logs across the raging outlet, I was happy to find a campsite among the snowbanks. This is pack #2, which performed admirably. After the first mile, where it felt like a monkey hanging on my shoulders, it stopped bothering me. It was difficult to load it up to 30 pounds--I guess I am used to minimalist backpacking--but I stuffed in three days of food and a bunch of luxuries I don't ever bring-- a pillow (!) clothes to wear at camp (!), extra tent stakes, bear spray (I will bring this sometimes, but not always. I was glad I did when I saw a cinnamon-colored bear) and a groundcloth. 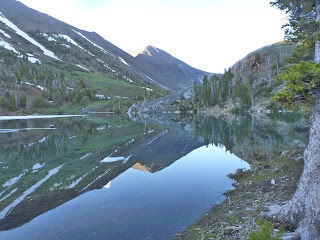 This lake, I feel, is one of the most beautiful places on the planet. 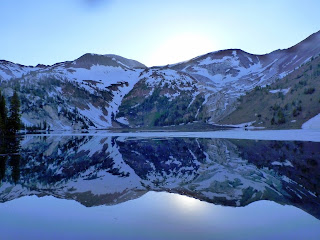 Even a surprise thunderstorm rolling through at two in the morning didn't bother me too much. Even though there was a lightning struck tree near my camp. 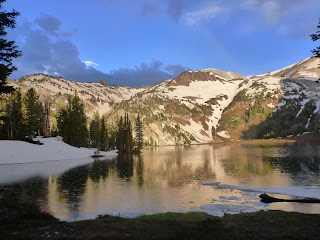 I spent a lot of time watching the ice break up on the lake. Which is more fascinating than you might imagine. 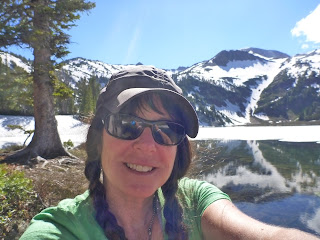 Who needs anything else? 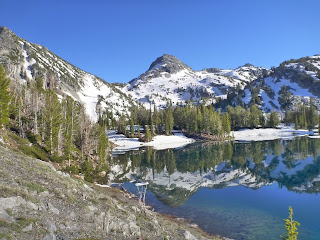 This is why I do it: the grim winter runs, the weight lifting, the relentless pursuit of fitness. Two days later I would be running down a trail and a woman I know slightly would see me, and say, "I always see you out here doing something like this. You are an awesome athlete."

Well, not really. I only need to open my Google Reader to know that there are plenty of women more talented than I. You work with what you have. Sometimes you are breathless. Still you push on. Your Ice Lake is around the corner.