As we hiked toward Aneroid Lake, Indigo and Little Bear raced back and forth between us. They darted through meadows and into streams. Even at the lake they didn't want to rest. Indigo swam laps in the lake and Little Bear just pranced around being Little Bear. Not for the first time I thought about how dogs don't have a governor that tells them to conserve energy, slow down, beware of the bonk. They just go until they drop, trusting that they will be okay.
That same weekend two other things happened that made me muse about governors. As I headed out of the lake in the early morning, everyone else still asleep in their tents, a group of trail runners, all kitted out in fancy tri type gear, passed me enroute to Pete's Point, a high spot overlooking one of my most favorite off-trail lakes. I had been there the day before, hiking fast to avoid thunderstorms. As a day run, it was long and rocky and steep. I watched the lone woman's perfect brunette ponytail bob out of sight. I envied her, for just a moment. A really hard run! Pain and suffering! Um...No.
The next day I was talking with a friend about my upcoming PCT hike. I allowed as how we COULD hike twenty mile days, but were only going to average 14. He looked at me with confusion. "If you CAN do it, why wouldn't you?"
I fumbled around in a quagmire of explanation. Taking in the views! Swimming in lakes! Not running ourselves to exhaustion every day!  Too many years on trail crew beating up my body! I want to do this when I'm 80! He just shook his head. "I like to go as fast as I can, all the time," he said.
Governors. We all have them. They are fed by what has gone before and what we currently battle. On a sleepless night I pondered where I fall in the spectrum. I have friends for whom a short hike is more than enough. Others who will casually run to the summit of  Chief Joseph Mountain and back. I probably lean more toward that camp. I embrace the slog, try to make every outdoors (and gym, sadly) encounter count. I need to feel my heart beating and my breath in my lungs. But I don't feel the need to push past exhaustion every single time.
This weekend I hiked to four lakes, putting in twelve miles. At each lake I stopped for a few minutes to just be. For me this is worth more than any GPS calculation of speed and elevation.
At least I tell myself that. A part of me really wants to be like my friends who revel in the hardest slogs possible (you know who you are). I admire their athleticism and their drive. At the same time, I know that I go to the mountains for something else, something that is missing in the other parts of my life. Solitude. Peace. Immersion. I don't want to just pass through the country. I want to be the country.
Though everyone has their tragedies, life itself has knocked me flat enough times that I need something else in the mountains. I don't want to suffer--too much. I have enough to live up to in regular life. 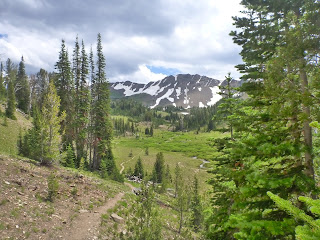 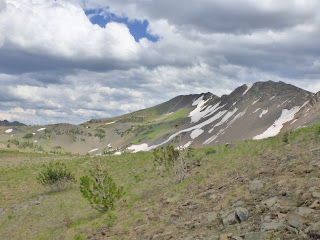 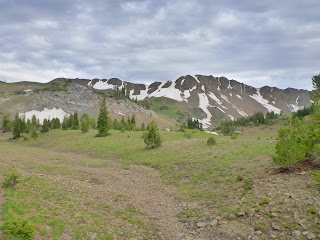 Other people have governors that run in higher gear. They have their own reasons. Like a woman named Anish, who is going after the unsupported PCT record, hiking in the forty-something mile-per-day zone each day. If you look at her Facebook page, she appears to be loving it. That just sounds horrible to me. Impressive, but horrible.

Nobody's way is better. I probably couldn't successfully live with someone who had a way different governor, but I think it's good that people are still out there, whatever their motivation. I worry about the future of the wilderness; it is so much different in the world than when I first started going out there. The more people who love it, whether by running through it or just hanging out with their feet in the water--or somewhere in between, like me--the better.