"How was your hike?"

What do you say about an experience that can't be summed up into words? My 280 mile hike on the Northern PCT was so many things. A few come to mind: Challenging. Humbling. Beautiful. But none can really describe it. There were moments when I wanted to get off the trail and others where I never wanted it to end. We hiked 280 miles in seventeen days, working our way up from 15 miles a day to 21. We met locals, thru-hikers and one thief. We slept nearly in the trail, on a trail bridge, and in places with glorious views. We went two weeks without a shower.

Was it a vacation? No. Right now my Achilles is popping in a disturbing way. I have an overwhelming case of the lazies. Slipping back into the fabric of my regular life is not easy. I want to run back to the woods where everything is simple. Climb 2,200 feet? Fine. Life is simple on the trail.

Surprisingly? The time to think. We chattered along at times but there were miles and miles of thoughts. This hike has made some things pretty clear. I am still absorbing its lessons and will attempt to describe them in my next post, after this weekend. Because I am going...camping.

Well, more like "Glamping." We will have coolers and chairs and real food. This is the first year of the annual Indian Crossing gathering without Ken and I need to go. Have a great weekend everybody!
Posted by Mary at 10:12 AM 1 comment:

well, campers, we made it. i am in canada. i never thought i could be so tired, or that i could string together so many 21 mile days in a row. pictures and stories to follow soon.
Posted by Mary at 2:41 PM 4 comments:

This will be my last post before we head out into the Sort-of-Wild. But don't delete me from your blogroll, because I will be back in September with tales of wilderness intrigue. Or, at least good pictures. We leave from Snoqualmie Pass on the 10th and hope to reach Manning Park by the 31st or before. Right now my pack weighs a staggering 31 pounds. I'm not a fan, but it is 50% or more food and water. I've tried to lighten the load but there are things I need. Not having had the foresight to get Lasik, I have to cart extra contacts, solution and glasses. Because I'm a rotisserie sleeper, and completely unable to sleep close to other people unless I'm married to them, I have my own tent. I have a tent and not a shelter because I haven't heard of one of the new ones that can completely stand up to wind, rain and snow like mine can. I have a Kindle because I like to read when I can't sleep. I have a solar charger in case the Kindle dies. I have my phone because I don't really want to leave it in a car parked in Seattle for three weeks. I also have extra panic snacks. I could live on the edge a little more, but instead, I am carting 31 pounds for the first seven days. Doesn't sound like a lot, but it's about ten more than what I have been carrying all summer.

You would think that the day before I am going to be hiking for 21 days that I would rest. You would think that, but you would be wrong. Circumstances aligned so that I hiked up Hurricane Creek with J to find limber pine cones for a project. We climbed above the waterfall and I found these nice little pools. It was hard to turn around. There is always so much to explore. 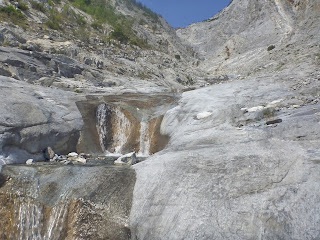 Earlier this week I got to hike for work to check out a bridge replacement project. It is huge, being able to do field work. I do miss it. The climb down was 2500 feet which means the climb up was too. I got very dehydrated, a rookie mistake. But it was a nice spot. 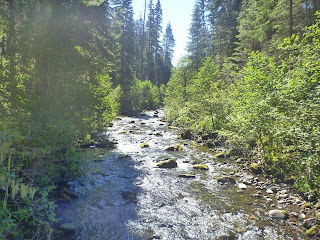 I just got a text that thunderstorms and heavy downpours are expected this weekend! Yay! But on the bright side, that means: no fire closures on the trail, it won't be hot, and I get to see how Carol's space age tent performs in rain before I buy one!

Okay, everyone be good, go on lots of adventures, and don't waste a single moment of your life.

I used to hike off-trail a lot. As a wilderness ranger in Idaho, I learned how to follow creeks to the hidden lakes above and how to navigate talus slopes to drop into the next basin. Back in the Dark Ages, we didn't carry GPS units--they were still woefully inadequate--so all of us carried maps and knew how to use them. In the high country of the Oregon desert, I rarely needed a trail, because I could see my route for miles. And in Alaska, where a mile of trail construction could cost a million dollars, we bashed through head-high devils club and deep into ravines, carrying aerial photos.

When I moved to the Wallowas, I started hiking on trails most of the time. There were so many trails, and it was a luxury to let down my guard a little and look around instead of wonder where I was. Truth be told, I can speed along on a trail but when it comes to cross-country travel, clumsiness reigns. My skin bears scars from skidding down mountains and battering into tree limbs. Once I slid head-first down a chute, luckily landing on a snowbank. If there's a protruding stick or spiky bush, I am sure to find it. It was nice to have a reprieve from all of this.

On Saturday when J proposed a cross-country traverse, I looked at him askance. "You want to..hike?" I asked. "All day?" While J has many great qualities and interests, he just isn't as obsessive interested in it as an activity as I am. And there is this: every hike we have been on has involved some element of slogging, because he is interested not in the easy strolls but in places where few people go. This time, he wanted to trek from Murray Gap to Hurricane Creek, a daunting prospect involving many, many elevation changes and ascents up untracked slopes.

I figured I should seize the day, though, and really, is there anything better than alpine hiking? An hour later found us past two miles of bad road and heading up the first ascent, a crumbly side slope leading into the Silver Creek basin, a place that fascinates me no matter how many times I go there. It's not the ancient hand-routed signs that say "Trail" when there is none, the secret lake nestled below Ruby Peak, or even the mystery of the old mining adits. It's the whole big country, laid out like a blanket. It makes you feel like you could walk forever and not see it all. 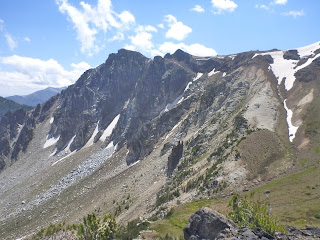 Under billowing clouds nearly at nose level we climbed over Traverse Ridge, accompanied by mountain goats. Frances Lake glimmered in the distance. Ridge-walking on a broad plateau, I had never felt so fine and good with the world. 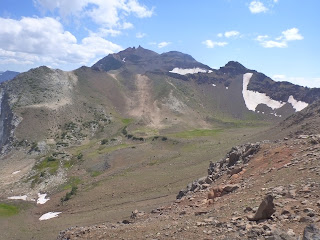 Even when I saw there was another ridge to climb, one that struck fear in my heart. Looking up I saw what I thought was my worst fear: ball-bearing rocks a sheen on solid granite. J said, "You shouldn't imagine the worst possibility. Just imagine it working out." Just another reason I love him, and so I picked my way up, talking myself through it. It wasn't that bad after all. We had our Safety Dog with us, so we figured that we were okay.* 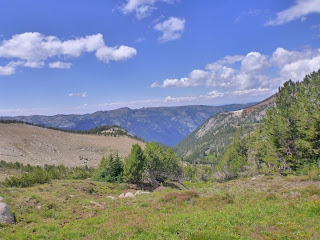 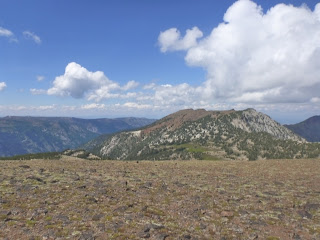 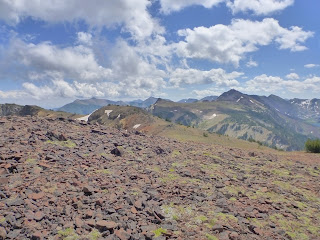 Then we were poised at nine thousand feet, right next to Sawtooth peak and the highest lake in Oregon. A tricky climb later, we were headed back to a real trail, although this trail, which steadily descends into the Hurricane Creek drainage, is about as bad as it gets. Worn to a patina of slippery rock, it can't take the increased use it has been getting, and it is like wearing roller skates. We slogged along grimly, each declaring that we never needed to hike this particular trail ever again. Much better to stick to cross-country travel.

In the end it took us eight hours to travel ten miles. Because I don't really care about such things, I have no idea how many feet of climbing it was, but it was a lot. And it was a perfect day with alpine magic, the best kind that there is. 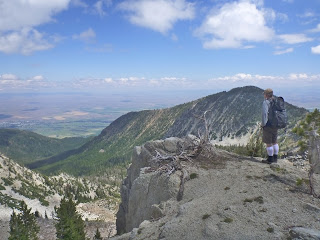 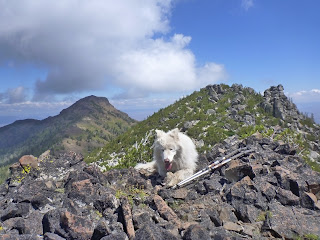 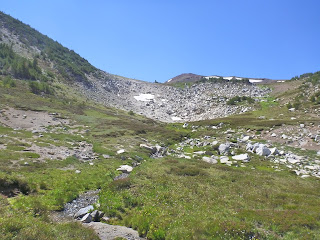 One Week until the PCT!

PANIC! How did this come about so fast? In one week I will be hiking almost three hundred miles to Canada.

This is what I've done so far:

1. Mailed one resupply box (for Stevens Pass)
2. Freaked out and mailed extra chocolate for that box
3. Cut out a bigger hole for my bladder hose on my pack, and was heard to say, "oops, I don't know if I should have done that" as I cut farther than I should have
4. Experienced two equipment failures: a hole in my Darn Tough socks (Guess they aren't so darn tough) perhaps caused by a rubbing off of the back part of the fabric of my Cascadias; I've only worn them about 100 miles. Repaired Cascadias with duct tape.
5. Gathered up food and supplies for Stehekin box and for the first leg
6. Binged on extra snacks
7. Gathered a permanent gear pile in the house which I sort through obsessively
8. Packed almost my whole bag--23 pounds without tent, electronics, and some food. Trying to keep it under 30 or things get cut!
9. Pouted because I won't see Anish on the trail. She's setting the course record for a PCT hike, not just the women's record. 50 miles a day through Washington. We won't be doing that.
10. Worked like a fiend on projects so I can leave with a clear work conscience. But they keep popping up, like Whack a Mole.

What am I doing today? Working a few hours. Putting new duct tape on my hiking poles (it's a great place to store duct tape). Fretting over the immense pile of blister stuff I'm carrying. Do I really need Nuskin, bandages, moleskin, duct tape, cushiony cut-out things and special blister coverings? Probably not...Charging up electronics. Binging on snacks. Making lists...How people do the whole trail is beyond me.

So here's a question: Do I take my old, pitch-stained, holey T-shirt and skort with me and risk a homeless look, with perhaps more holes appearing, or do I wear new, cute stuff, which could get ruined, but would look more presentable?  I'll be waiting for your replies. Do you wear new stuff on a long endeavor where you know it could get trashed? or do you wear your old stuff that will end up being rags?
Posted by Mary at 9:25 AM 7 comments: