Hiking the PCT North, Days 5-9: The Dangerous Ford, Secrets of the Locals, A Garnet Thief, Creepy Woods and the Best Hiking Day Ever

I always like Day 5 of a backpacking trip. Long enough to completely surrender to the current of the wilderness, yet not so long that you start dreaming of salads and beds. We awoke determined to have a Lake Day, the kind where you roll into camp early, swim, rinse out all your salt-stained garments while wearing your rain gear. Glacier Lake, a paltry eleven miles away, seemed to fit the bill.

But first there was the "Dangerous Ford" to conquer. We had been hearing about this the entire time. Signs warned of dire consequences and urged us to take a lower bypass route. Hikers in the other direction spoke of its slippery nature. Quaking in our Cascadias, we pressed on to find....a stream of no consequence, punctuated by boulders. "This can't be it," I puffed as I regained the trail. But it was, and if you picked your route carefully, the water barely reached my knees.

Buoyed with confidence and several liters of unnecessary water because we had mistakenly heard that the route ahead was dry, we pressed on over several "passes" in the woods and past lovely Deception Lake, where a trail crew was laboring on the tread. Along the way we passed three thru-hikers going southbound. Two of them had flip-flopped from Sierra City hoping to beat the snows and one was just starting on his trek to Mexico. "The North Cascades kicked my butt," he moaned, but perked up enough to state, "I'm carrying a soccer ball with me!" A cello, now a soccer ball. What next?


Glacier Lake, serene and turquoise, lived up to the hype once we were finally able to find a campsite. In the morning it was hard to leave as we meandered through several lake basins. At Hope Lake a local came wandering up and informed us that there was a trappers cabin just off the trail that we had to visit. While reluctant to take extra steps, I soon scouted out the trail and hiked down to the cabin, to find that it was being fixed up with a new door and other "improvements", with "Keep it Secret" spray-painted across the door.


My companions pattered down the trail uneasily. "What's the safe word?" Scout hollered. Unbeknownst to me, they had seen the local hiking out without me in tow, and had concluded I had been murdered (or just tied up) in the woods. I realized I have lived in a small town way too long. For the rest of the trip we referred to the harmless local as "The Murderer", as in, "There's the Murderer fishing over there."

After all this excitement the rain began to fall softly as we sped over a pass and down to Lake Susan Jane. Within sight of the ski  lift towers, and drenched in further torrential rain, it was not our favorite night. Shivering in wet shoes, we still appreciated the pika-occupied talus slopes of the lake. Glumly we packed up the next morning, knowing that two of our group were leaving here. Stevens Pass has a downhill mountain bike park open on weekends and bike riders in body armor watched curiously as we spread our wet gear, occupying a large portion of the patio.

Scout and I were now on our own for the next 210 miles. It was with a feeling of trepidation that we put our resupply in our packs and hiked into the unknown. The Glacier Peak Wilderness is renowned for its toughness and we soon found out why. The trail clings to the side of mountains, climbs steeply and swoops down, is littered with downfall and rocks. Over it all the snow-clad peaks of the mountain dominate. It takes your breath away in more ways than one.

We passed the deep bowl of Lake Valhalla, too early to consider camping, and pressed on to Lake Janus, its less beautiful sister. Mist rose off the lake like someone lifting a curtain to reveal our twisted route for the next day. It was a rollercoaster of steep climbs to high meadows and down through the forest past lakes and back up again. At mile 2496 of the PCT we stopped to admire the view. A camo-clad man with an empty backpack wove into view.

Stabbing at the map with a finger, he showed us our route: down through the forest and back up along an alpine slope. We could see the switchbacks in the distance. Scout, always friendly, wanted to know his destination.

"I'm just going over here to collect garnets," he replied nonchalantly, heading purposefully off the trail. Scout and I looked at each other. Collecting semi-precious stones in the wilderness? Wasn't that illegal? And why did people keep showing us questionable stuff? We must look harmless, we decided.

About that time a god appeared, in the form of a bare-chested thru-hiker in skimpy running shorts. (Note to husband: I like you better). Beaming with the knowledge he would be in Canada on Thursday (!) he mentioned he was hiking 40 mile days and inquired about us.

"Well, about fourteen to fifteen miles a day," Scout replied. The hiker was taken aback, but recovered gracefully.

"That's nice," he said. After he was out of earshot we howled with laughter, imagining the thought process: fifteen miles a day? I do that before lunch!

Descending and ascending more switchbacks than seemed necessary, we dropped down into the only camping area for some time, which I immediately dubbed the Creepy Woods. Similar sore-footed souls had come to rest there as well, although a perky couple tried to encourage us to continue on up the next pass. Hike five more miles? That would be a 19 mile day! No way, we thought. No way could we ever do that.

The next day we regretted our decision as we climbed to a long, sprawling traverse and the best day of hiking ever. The trail rolled through alpine tundra, past the jewel that is Lake Sally Ann, and each step revealed a new set of mountains. Climbing over two passes,  imaginatively named Red and White, we chose the best campsite ever, too, high on a hill with a view of Glacier Peak. We had come 17 miles on a perfect, perfect day. Things could only get better from here, we thought. We imagined more gentle traverses, blue-sky days and incredible campsites. How wrong we were... 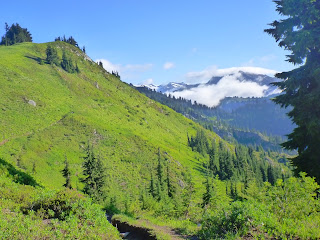 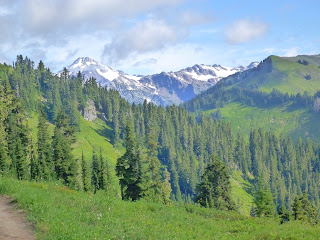 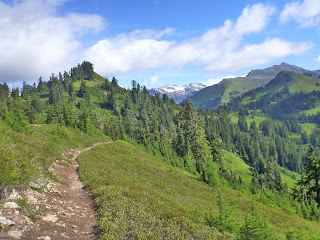 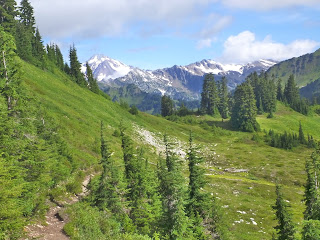 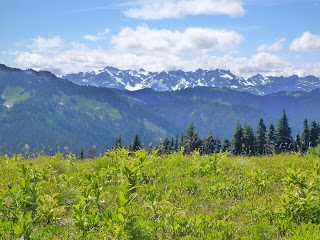 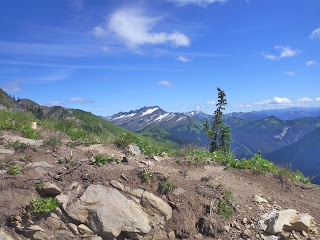 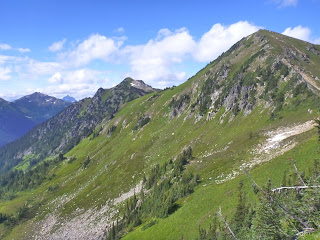 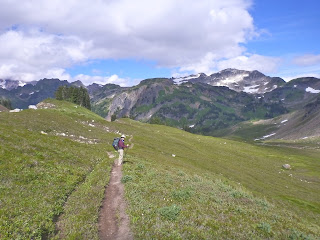