I can't deny it--fall is here. Last week a thin dusting of snow covered the high peaks and the light is vanishing by minutes per day. While I love fall in the mountains, I have a hard time with the disappearance of summer. I want to be one of those winter people, the ones who rhapsodize about skiing, but the older I get, the less enthusiastic I become about the sedentary cold evenings in the house, forced inside by sub-zero temperatures, the white-knuckle driving through blizzards, the long, long nights. Yes, tramping through powdery snow mixed with crystals on snowshoes is fun, and if I viewed winter camping as more than a struggle to survive, I might love winter more. I just..don't.

Neither do I want to live in the tropics, though. I spent six winters in Florida and the unchanging sameness of the hard blue sky was enough to drive me around the crazy bend. I like seasons, I do. But here in the 45th parallel, they are so..unbalanced. Winter is so....long.

And to be honest, the kind of summer I love is the mountain summer, that brief time when the sun lies in a particular way on the peaks, the little bite to the air that comes with high elevation. But with mountains, you only get that for a short time. And nobody loves a whiner, especially a whiner who chooses to live somewhere and then whines about it. So what to do? Embrace the season you're in. And go backpacking while you still can. 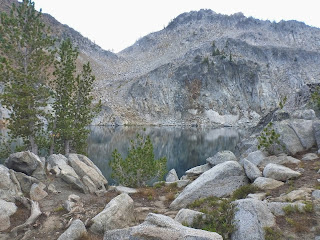 Echo Lake is nestled at the end of a steep climb (2,300 feet in three miles) along a no longer maintained trail. You work for Echo Lake, but the reward is an evening to yourself, and because you can't sit still, a scramble up to peek over into the next lake basin. 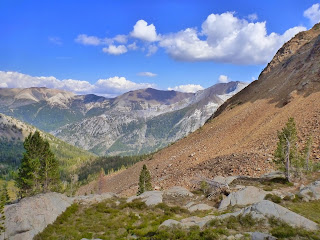 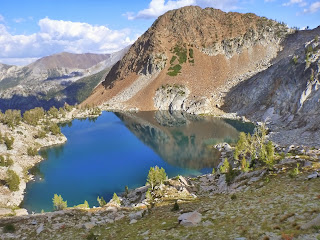 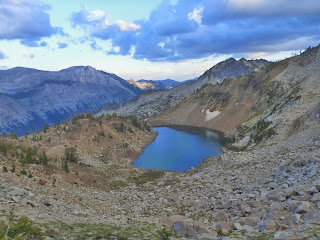 You can stew in seasonal sadness, infecting everyone around you with useless misery, or you can march on and embrace the season you are in, and that's the only real choice to make. So long, summer. I will miss you.

Winter, I approach you with trepidation. We go back a long way, you and I. Let's do this.
Posted by Mary at 8:03 AM