I don't write about running very often. I've done it for so many decades that it doesn't seem remarkable, and I don't race anymore. Often it is just a means to an end, a chance to cram some exercise into a busy day. But sometimes everything aligns and I remember why I still run.

So, still furloughed, I seized the opportunity to drag take my husband to the coast. I admit to wanting it all--I want to live in a place where the mountains touch the sea, where there are plenty of alpine lakes nearby and there is little rain. I know no such place exists, but luckily I live in a state where you can get to the ocean from the mountains in a day. 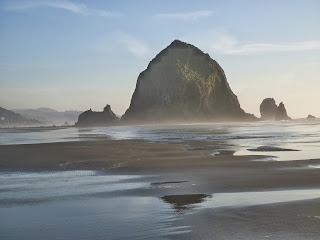 Though I wanted to hike, I also wanted to run on the beach. Cannon Beach looks like a snarly nightmare in summer, packed with tourists, but in October it was perfect. The tide went way, way out. Because it was at sea level I felt fast. A man carrying a bowl of cereal (?) said, "Looking strong!" (Nobody says that at home). Cute dogs danced along behind me. There were nice rocks to look at. How lovely it would be to have beach running as an option. When you run on the beach, it's flat. You don't have to watch out for rocks. Or bears. Or mountain lions. You can go as far as you want, or at least until you run out of beach. 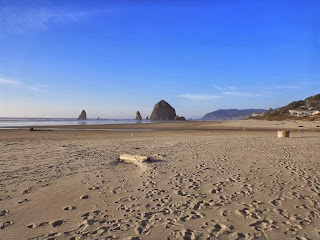 We hiked too, of course. I dragged took my husband up to the breathless heights of 1500 feet. Once the fog gave in and melted away we had beautiful views. At times like this I think. I could totally live here. Get a little cottage by the beach and write books and kayak. Sometimes I get a little sad about not being able to try out different lives but still be able to go back to my old one.


It was good to get my ocean and beach running fix. Also, rockfish tacos, a 10 year old's soccer game in Portland, and a stop at Trader Joe's to get the two things I am completely addicted to: Rosemary artisan bread and dark chocolate peanut butter cups. I could live on those two items, I swear.

The ocean for me is the second half of my heart. The mountains are the first. It's too bad that I can't have them both in the same place (without endless rain) but I'll take a visit now and then. It's true that perhaps if I lived on the beach, running there would be old hat. So, maybe once a year or two is the best way to go. See you later, ocean.