Women on the peaks

As I type this, the temperature outside hovers at eighteen degrees. I know this because I just shuffled outside in my robe and Acorn boots to gather what little kindling I could find, since I haven't had the time or the daylight to split more recently. I know that the robe and the boots aren't a good look, but the world is dark outside, lit only by a few pale stars. Winter truly is upon us. As if I didn't know it, my late afternoon bike ride yesterday. up the Hill of Death and along the lakeshore drive was an endurance ride, my feet and hands slowly numbing due to the early loss of sun. "You have to get your bike ride done by noon," J helpfully suggested when I returned, a chunk of ice. 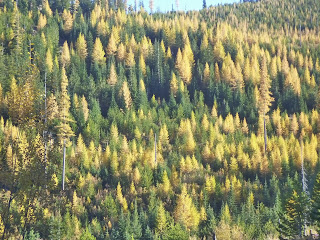 It has been sort of a long time coming. September was a wild one, full of snow and rain, but our October has been a fall of dreams--warm, sunny, with the yellow of larches, perhaps my favorite tree, shining on the mountains. It was a perfect time to try the peak that has always eluded me.

To be honest, Dug Peak, which isn't that big of a mountain, always seemed a bit out of reach. I don't like slippery, shifting talus, and I've never been much of a peak bagger. There's only a goat trail. Lakes are my thing. I don't  mind a little exposure, but I definitely don't like picking my way down from someplace high in uncertain footing. But there it was, only five minutes to the trailhead and it was the last nice day of the year. It was time to go.

The first two miles before the turnoff to the peak are on a "trail". This trail has been eroded due to its location and terrain, and consists of those little slidey pebbles that I love so. It also climbs relentlessly, and I slowly puffed my way to the smaller path that goes to the peak itself. Not a system trail, it was carved out by people walking, taking the most direct route. Basically you stay on an ascending ridgeline and just keep climbing. 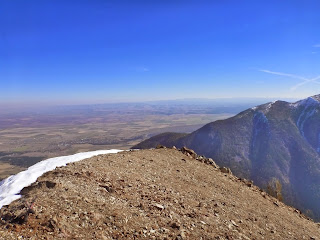 I overtook a man in Five Fingers who wasn't sure about the exposure and continued upward. I could see the outlines of two other hikers ahead and fumed to myself. It isn't unusual to have a hike to yourself here, and I was hoping for that. But as I crested the last rocky spire, I was delighted to find two of my favorite mountain climbing women in residence.

I can't describe how great it is to see other women out in the wilderness. It shouldn't be unusual, but it still is. One of the women here had just started doing long peak hikes this past year and she loves it. A convert to the mountains is always refreshing. We sat on the narrow spine and realized how lucky we were to be here. 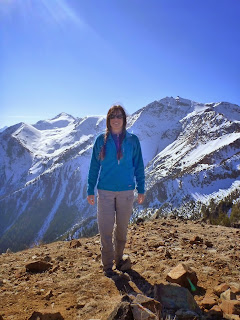 I really wish I had kept a log of all the miles I've traveled in the wilderness this year. It's probably at least a thousand. I think?

Get out there while you can! I'm off to chop kindling, though not in my robe.
Posted by Mary at 9:13 AM