The ranger folded her arms and stared us down. "You should consider changing your plans."

TC, Buffalo, Camel and I exchanged glances. We had planned this backpack trip for months now. We knew that the ranger knew if our two important creeks were flowing, but she refused to say. Instead she fixed us with a steely glare.

"People bail out on this trip because they think the desert part is boring," she said. "And it's going to get cold."

Here is the dark side of the Park Service. I worked for them for years, and I saw it then too: people who want to protect the park  from visitors. Granted there is plenty of bad behavior out there, but the possessiveness of the wilderness is sometimes taken too far.

Assuring her that we were experienced hikers didn't work either. "It's different here," she said firmly. Finally, after TC said we were prepared to carry 9 liters of water, the ranger reluctantly gave us our permit. We scampered out before she could come up with any more obstacles. Later a park volunteer told us that Boot and Fresno creeks were both running. Thank goodness for volunteers. They always tell the truth.

I had met these three hikers (TC, Camel, Buffalo) in the Grand Canyon last winter on a Rim to Rim to Rim backpack trip, and I recognized kindred spirits. We are all from the same tribe: independent, happy to walk solo or together, from a patchwork of interesting adventurous backgrounds. As we hiked, someone would casually mention living in New Guinea or Israel, or climbing Mount Rainier. We could ask the question: "What's the next trip you have planned?" and hear answers like, "Mount Everest Base Camp" or, "I'm thinking about hiking the Colorado part of the CDT solo." I can't tell you how much I love finding people like this. It makes me feel like less of a freak.

We had all had decided to meet up in this remote corner of South Texas to hike into the new year and we met in Dallas for the eight hour drive south. After two nights in the cold and windy campground, we were finally ready to go. This hike climbs into the mountains and drops to the desert, finally climbing again through a canyon, for a distance of a little over thirty miles. With a lot of elevation change and short days, we decided on three nights for the hike, though some people do it in two. 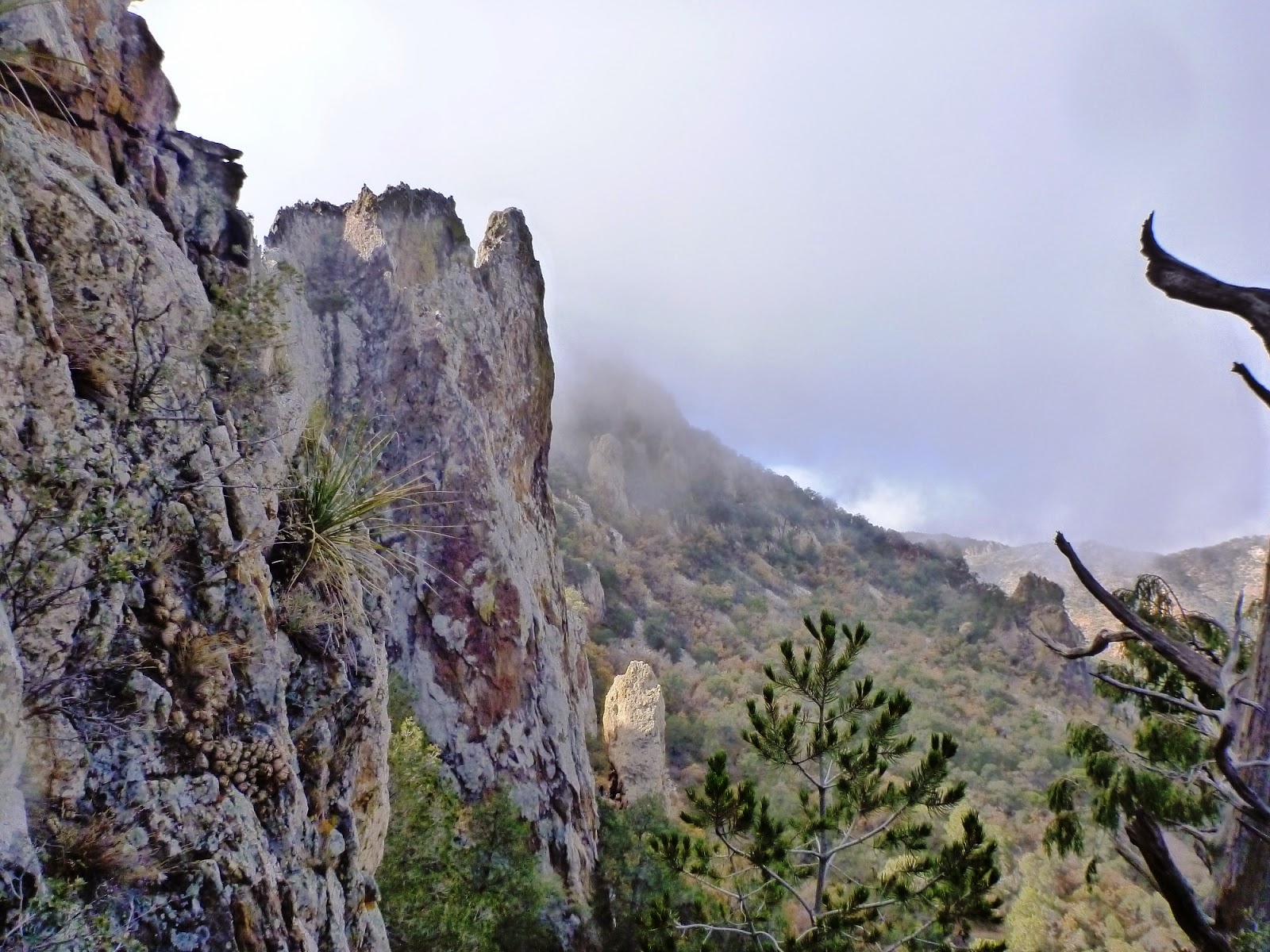 Last summer's South Cascades hike taught me not to fear water carries, so I loaded up with six and a half liters for the uphill hike into the Chisos Mountains. True to his name, Camel  had much more water than that, but the others had about the same as I did. The combination of lots of water and warm weather gear--temperatures would range from the eighties to below 20-meant that this would not be an ultralight hike. Luckily I had no scale but guessed my pack weighed upwards of 40 pounds. Fortunately our first day was short, only five miles, climbing a few thousand feet to a campsite near Boot Canyon. The trail wound upwards through rock faces and jagged cliffs and is not really wild, since a few composting toilets can be found and campsites are marked and have bear boxes in them. However, the sites are far enough apart that you can feel like the only one on the mountain. 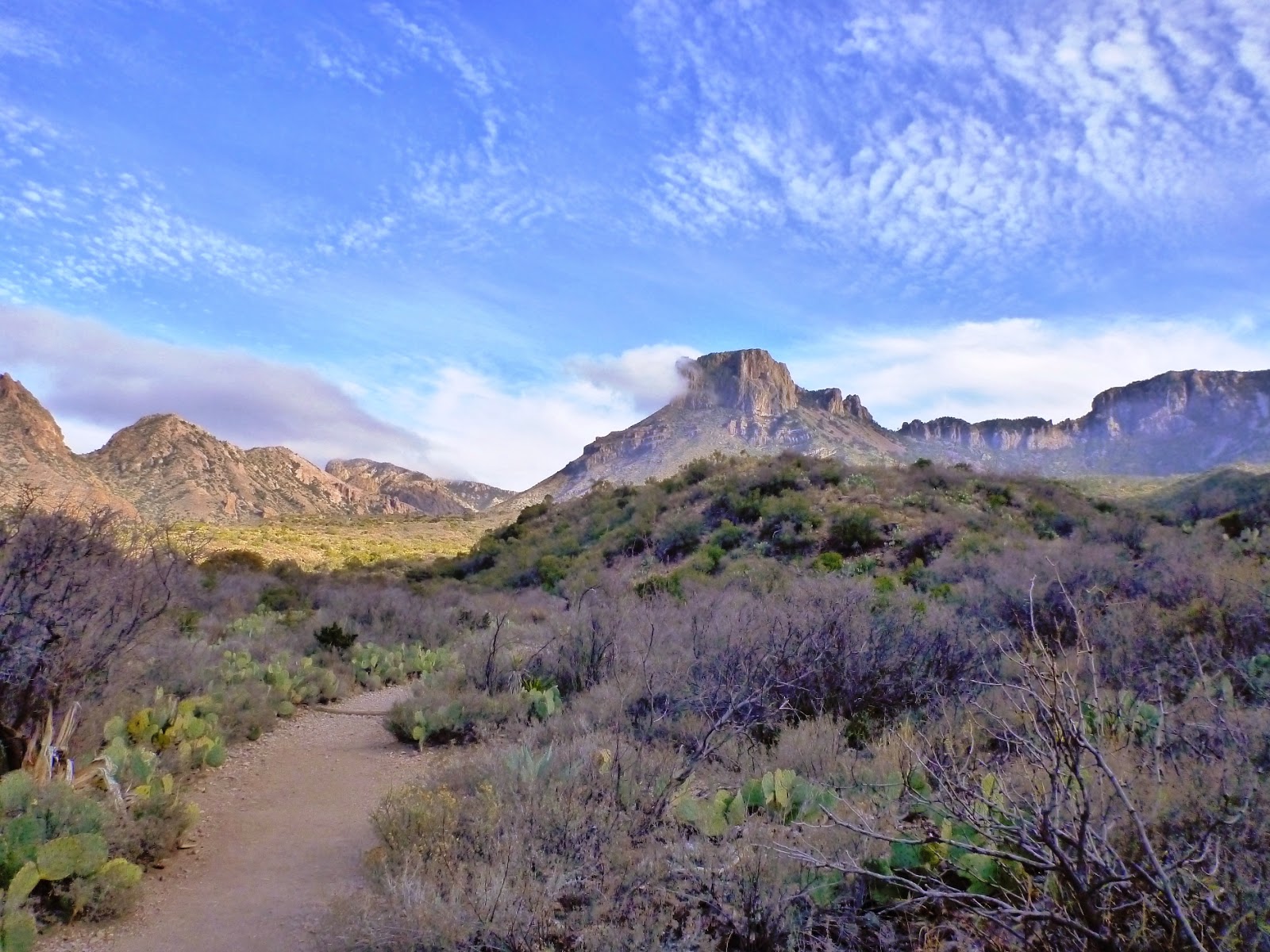 Buffalo and TC split off to climb Emory Peak, the second highest mountain in Texas, while Camel and I continued on to our campsite. We set up our tents and took a day hike over to the South Rim. The temperature hovered comfortably in the forties, though we were aware it would dip down to about twenty that evening. Along the way we passed the flowing Boot Creek, along with deep, deep pools of water--plenty of water, water that would last a long time.

Standing on the rim, we could see all the way to Mexico. The Rio Grande was a ribbon far in the distance. Between us and the river, a wild desert stretched before us, 2500 feet below. Tomorrow we would be there.


Though I had hiked in the desert before, it still has the power to intimidate me. Would there really be water in Fresno Springs? How easy would  it be to cross to our cache site, several miles distant? Predictably, the evening wind began to blow and I shivered a little, wondering about all there was to know and all there was to find out.