In the seven years I lived in Southeast Alaska, I flew in floatplanes probably a hundred times. I flew to lakes, burdened with rifle, an inflatable raft, and camping gear. I flew to backcountry cabins and to fires. Sometimes we flirted with the minimums, flying just under the cloud ceiling. Once a pilot asked us where we thought we were. Other times we could barely see. When the plane couldn't land and get us, we were stuck out in the wilderness for days.

I never got scared when we flew. I flew with plenty of white-knucklers who did, though. We were supposed to say when we didn't feel comfortable, when we wanted to turn back, but none of us ever did. On one flight, we all wore our hard hats because our heads kept bumping the ceiling.

I knew planes fell from the sky. I spent days searching for one of them, and we never found anything. The earth or sea had swallowed a DeHavilland Beaver up completely. This was eleven years ago, and nobody has found any trace. I think of the five people sometimes and wonder where they are, and if they will ever go home.

Last week, nine people died on a flightseeing excursion in Misty Fiords National Monument. They were on an Alaskan cruise and had opted to take this trip. People die in Alaska all the time but I was amazed to learn that I knew one of the tourists on board.

Margie was someone I had worked with on a project in Nevada, and I wouldn't say we were friends. We were commiserators in arms, often discussing the challenges of our program. I only met her in person a couple of times, and we talked on the phone a few more. Last year she decided to retire. Then she and her husband boarded a floatplane last week and their lives ended at Lake Ella.

We all go sometime, and maybe to be with the person you love the most, in a wild and beautiful place, is better than lingering in a hospital. We don't really get to choose, although some people do by their lifestyles. What I've learned from this is: don't wait. Not for me, ten more years at a computer; I'll take the considerable penalty and retire from this job in six years. If I could go sooner, I would. You have to take every day and have something great from it. Even if it's just one minute outside in the sun. One walk. One kiss.

And to lighten the mood: I just spent three days in a vortex! Coming soon, the near escape...
Posted by Mary at 8:32 AM 2 comments:

Sometimes, I think, I should move away. I imagine what it would be like with a real lap pool instead of a glacial lake where we have to don wetsuits, gloves and booties in July. An airport where we don't have to spend two, sometimes four extra days to get to a destination. A grocery store beyond Safeway. More hiking soulmates, the kind who know and stay on that edge between pushing yourself and impossibility. I really, really want more of those.

There are days like today. I arrived in a cloud of dust at the Tenderfoot trail head, bound to see how far I could get. There were two cars at the trail head. Two cars, I fumed. Then I had to laugh. I am spoiled. What would it be like to have parking lots completely filled, two hundred people on the trail? Anywhere else, an easy hike like this would be overflowing. 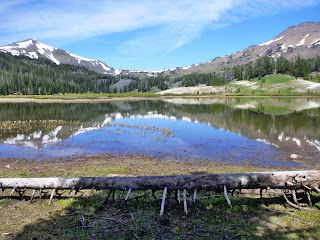 Where else can you hike to a place like this in four miles and only see four people? (Don't tell anybody!)

I pushed  on to the pass. There was one snow field to cross, and some would have found it sketchy. You fall, you roll a long way. Determination carried me over. Dollar Lake, about a quarter mile off trail, was wonderfully quiet (though scarily low for this early). 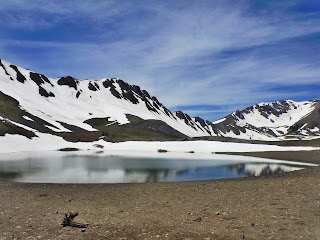 I am starting on my seventh year of living in the same town. After this year it will be the longest I have lived anywhere since I was 17. I used to hate the idea of being stuck somewhere.  Wouldn't it be boring? Wouldn't I be boring? Wasn't the point to carpe the diem?

And yet. I am less and less concerned with big goals, with proving anything, with career aspirations. At my mid-year review, my supervisor asked me what my next step was. "Um," I floundered. I know the right answer is a higher grade level, more responsibility, but all I could think was: more desk time, less flexibility, a bigger city. It sounded like a jail sentence. I know that is what people are supposed to want, but I don't. In fact I'd be happy going back to being a wilderness ranger, if I could. That won't pay the bills, though.

I glissaded down the snowfield enroute to the trailhead. For years I moved every six months, then every few years, always thinking I was going to a better place than the one I left. I was good at leaving, good at goodbye. But after six years, I may have found the place I am not going to leave. The last place. It's a good feeling.

As I drove into Sequoia National Park, years and years fell away. I was twenty-six again, decades of possibility ahead, living in a small cabin in the big trees and planting trees for a living. In the long summer evenings, I sat on the Ready Room porch with young men who fought fire. In my mind, nothing could slow us down and we would never grow old.

But here we were all these years later. I met my friends, the ones who never left, for a 12 mile hike. Caught in an afternoon thunderstorm pattern, the Sierra is nevertheless desperately dry, and we found only a sprinkle of snow at Pear Lake, 9200 feet. As we hiked we remembered, and things I had forgotten came flooding back. How had it been so long ago? And why is it that the friends you make in your twenties seem to be the most true?


I ventured over to where my cabin used to stand. Here was where I impressed the tree climbing crew with my prowess in splitting firewood. Here was where I met the firefighter who would go on to smoke jump and later, break my heart, but also who opened my eyes to fighting fire in Florida, a rich chapter in my life. My cabin is gone now, replaced by the "John Muir Lodge." Tourists swirled everywhere, and to escape them I drove down to Cedar Grove and hiked 13 miles before noon. The backcountry was strangely empty, a contrast to the tourist roadside stops.

After that I went to where the hotshot crew used to live, where my friend still works as a cook. It's different there too, only a handful of the crew living on site, where all 20 used to stay. They all have families now, when it used to be footloose guys following fire across the country.


I was only in the Sierra for two summers, but don't you always remember the places where your life changed its trajectory? This was one of those places for me. Seeing my friends, I also saw the path not taken.

I almost expected to see the girl I was in the mirror. Instead there I was, an older woman now. That's how powerful a time warp these places can be. I think sometimes about the alternate paths I could have taken. I know there is no such thing as parallel lives, but sometimes I imagine other versions of me out there living in them. One of these would surely be in the Sierra. 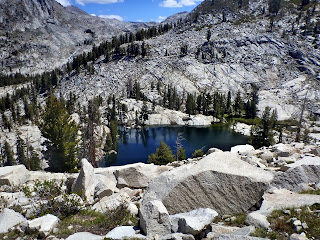 "Hey True Believer!" a man yelled as he entered the gym. I didn't really know him--he often was there and once commented on the heftiness of the dumbbells I was curling, but apparently now I had a "gym name". Are those similar to trail names?

I think it's true that every town has their characters. In small towns of a thousand people or less, they are just more obvious. For better or worse, you can't escape the people you don't want to see, and if you do want to see someone, all you have to do is ask: "Hey, have you seen Peter lately?" or, better yet, go to the moraine, that's where he will be, because other people have told you so.

This town has its share of interesting people. When I first moved here, I was cornered in the Safeway by a large man who without preamble told me that I needed to move in with him up the Lostine Canyon. (Later, friends told me, "Well, he DOES have really nice property up there.") In the same Safeway the other day, a woman behind me in line gave me her opinion of Caitlyn Jenner, unprompted: "I think being with the Kardashians made  him crazy. He would be normal if it weren't for them." Unable to escape, I silently willed the cashier to hurry while trying to politely disagree without causing a fist fight.

There's the mysterious man I call (secretly) Blackwater, because he apparently is independently wealthy and once mentioned he had worked in the Middle East, but reveals little of his background. There's the gypsy who hasn't had a job in ten years but travels all over the world. How does he do it? I don't know, but it isn't something you ask.

You can't really be nosy in a small town. You have to let the years slowly let you know about people. After all, you have to live with them in a small space. You might need them someday. It is easy to inadvertently offend--a woman I knew and liked abruptly unfriended me on Facebook and won't talk to me again after I posted that I heard wolves howling. "Anyone who is a wolf lover, unfriend me now," she posted. Who knew?

At work I can time my day by when a) Big Guy with Tiny Dog walks by (about 0900); Slow Walking Lady with Jack Russell strolls by (1000), Cowboy Hat Man with grocery bag (about noon) and Tony running in homemade moccasins (anytime between 1100-1200). Apparently I look out the window a lot! But there's always the occasional surprise, like someone riding a horse down the street. The small town characters are like that, a little dash of spice in an ordinary day.

I'm not a character, but after a few years in a town you get a reputation that sticks. The first two questions people ask me when they see me are these:


Now that I think about it, maybe I am a version of a small town character. I'm the outdoor obsessed writer, always off on a trail somewhere. I'm sure people think that's a little strange, as well as the fact that my husband and I have two houses and don't do every little thing together. That's okay though. It's better than being boring.

Do you have small town characters?
What two questions do people always ask you?
Posted by Mary at 7:05 AM 18 comments: