We hiked into dramatically changing scenery. Craggy rock outcrops strewn with flowers and open meadows, very different than our previous days, had me feeling like we were coming into a big geological change. 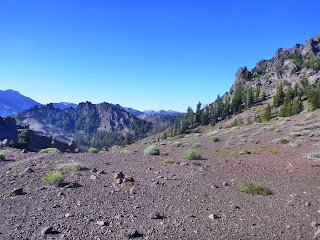 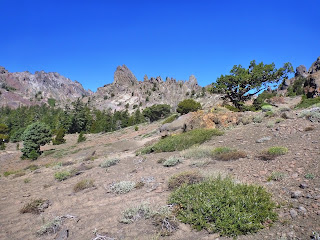 We began to see more and more day hikers as we headed toward Ebbetts Pass. A couple of them looked confused when we asked them if they had seen Sherrod Lake. "We haven't seen any lakes," they claimed, but only a half mile later Flash and I arrived at the lakeshore. 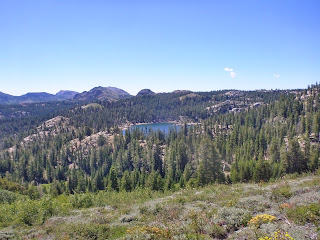 Our next goal was Noble Lake, though a northbounder wrinkled his nose in disgust. "It's not very noble!" he exclaimed. "I wouldn't drink water from there!" We plodded up some switchbacks to arrive at the lake, which was nestled in alpine scenery. It looked pretty nice to me.

"We have cold water," a woman called to us. "And food. And beer." I paused, caught as always in the section hiker dilemma. Trail magic, Flash and I agreed, was generally for the thru hikers. As section hikers, we carried enough food and our hikes were limited to a few weeks. We generally weren't starved to skin and bone like the thrus, and we didn't really deserve trail magic. But we had to get water here anyway, so we descended to a campsite occupied by some backpackers and two trail angels with horses.

They belonged to the Back Country Horsemen, a truly awesome group that volunteers to do trail maintenance. For all that everyone complains about trail conditions, I don't take anyone seriously until they actually swing a tool. The two women had cold water! Apples! My resolve weakened and Flash and I were sucked in the trail magic vortex. They even took out our garbage! Thank you, trail angels! 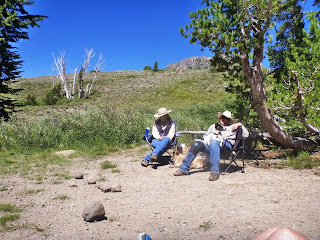 The apple fueled a short but steep climb to the saddle, and Flash and I began a long descent to Asa Lake, where we made dinner and moved on for two more miles to Wolf Creek, where we at last decided to cowboy camp. For the uninitiated, cowboy camping is sleeping out without a tent, just you and your bag and the stars. It takes a little getting used to, but I always sleep the best this way. There's something about having no separation from the sky that is peaceful and calming.

Despite this, I woke at three in the morning to heavy smoke. For a moment I thought I was back at fire camp in the nineties until I remembered it was 2014 and we were on the PCT. Where was the smoke coming from? We had been so lucky so far. Would a fire block our route? We had no information and nobody to ask. We had to hike on to find out. 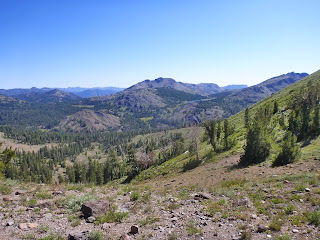