The whole hike, it seemed, we had been hearing about Benson Pass. It dominated the elevation profile, a behemoth of mystical proportions. Today was the day!

We rose from our creekside camp and immediately began a rocky ascent, because, Yosemite! Both Flash and I admitted we were tired from the day before, and so kicked it into granny gear. We knew we were facing more steep climbs and descents as the trail dropped in and out of huge canyons. A lot of the PCT is built to a 5% grade because it was originally intended for equestrian use. This section did not get the memo. 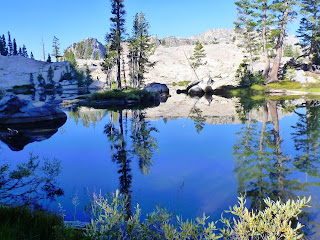 At the top of the first climb, we passed several delicious little lakes, and stopped for second breakfast. While we were basking in the sun, a mule train went by, and didn't even notice us. 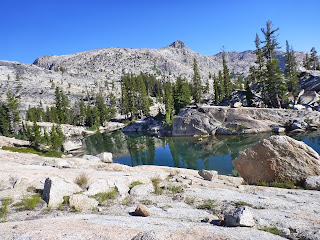 We saw two women trail crew workers at the bottom of one deep canyon, chipping away at rocks to make better tread. Impressive! Always say thank you to trail crew! It always makes them smile.

We had long been counseled to stop at Benson Lake and lounge on the "Riviera"--a long, sandy beach. But it was--gasp--off the PCT and in the end we chose to climb on to Smedberg Lake. Nobody was there, and we took an extended break soaking our feet. This was what I had hoped for, a mild sunny day, cool water, and solitude. 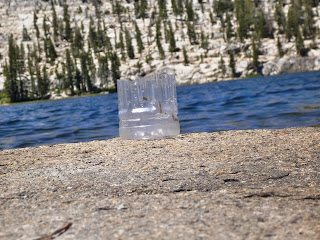 It's time to unveil my PCT invention. We both used Sawyer Squeezes for water filtration--a bag and small filter combo. But the bags are hard to fill up completely if the water isn't running right into them. Thus, the half Gatorade bottle! It weighs nothing and is indestructible. I was inordinately pleased with myself for coming up with it. 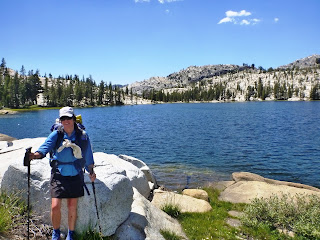 Finally we knew we had to pry ourselves from the lake vortex. There was one last 900 foot climb up to Benson Pass. Near the top of the pass it looked like the trail builders had just given up and put the trail straight over a sand dune.
Then it was down another steep descent, several thousand feet to Matterhorn Creek. "Don't go to the creek crossing," two separate backpackers warned us in tones of doom. "The Sierra Club is there. There's at least eleven people!"

Having had all available camping spaces taken by the Sierra Club two years before in Washington, forcing us to sleep on a trail bridge, we were gun shy and took the first campsite we came to. It had a sandy swimming hole and trees on which to hang our laundry, which was about all we could ask for in a site. It had been shy of 17 miles due to our extensive hanging out at Smedberg, but we only had about 21 miles to go. Twenty one miles and it just seemed like yesterday we had 215! I lay awake in amazement at what two feet can do.
Posted by Mary at 8:29 AM