We shivered our way down to the parking lot, excited for resupply day. We had gotten it mostly right, arriving with very little food left. That's the goal, people! Otherwise you are carrying too much. A new business called Sonora Pass Resupply will bring your box to the road, mail back any regretted items, and sells things that you might want (Chips! Cheese!) out of a truck. It's a great service and I hope the Forest Service continues to permit it. If you have used this service and liked it, write to the Stanislaus Forest and tell them so.

It was after nine when we left the parking lot, late for doing big miles, especially the climb we could see ahead of us. The steep, rocky ascent was alleviated by the beauty of the Emigrant Wilderness. I had read that Sonora Pass was where the geology of the area changes dramatically and this was easy to see. 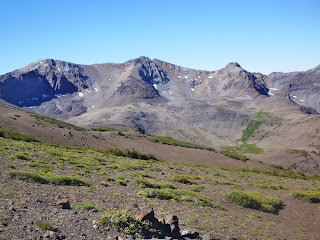 Reaching the high point, we gazed down at colorful tents spread out near an alpine lake. "After this hike, I'm going to just hike a few miles to a lake and hang out," I told Flash. PCT section hikes aren't for dawdlers, if you are trying to knock out a section in the limited time you have off from work. They are more about the miles. 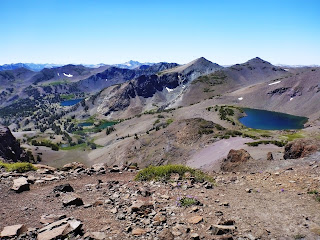 But even with that, there was still time to gaze around at the moonscape we walked through. A few northbounders passed, intent on a zero day at Lake Tahoe. Then Mike approached. Wearing a kilt and a big smile, he asked if we would be in a documentary. "We're just section hikers," we said, but he said that was all right. Look for Flash and me to star on You Tube! (No idea of the title).

Rounding the ridge, I saw the strangest sight yet. There was a turquoise lake with a deep red cliff, far across the canyon. What had caused this? We pondered for miles. Where was a geologist when we needed one!

Dropping off the pass, we took a strange old jeep road down to the forest. Creeks here were few and far between and hikers tended to bunch up at them. We met a man who had hiked the PCT in the 1970s and he told us how different it was now. Back then, he said, only 35% of the trail was complete, and there was a lot of road walking and cutting through farmer's fields. 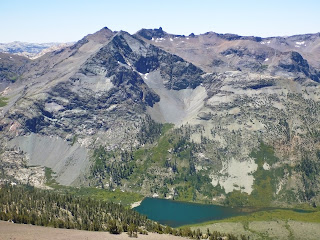 It would have been nice to stop there and talk some more, but there were miles to cover. We hiked on, meeting an actual geologist, Continental Drifter, who gave us a brief lecture on the area, which mostly went over my head. We told him to look out for the mysterious lake, and headed on. Ask for a geologist and you get one. The trail provides.

It looked like a fun group would be gathering at the first creek, and we agreed that we were sorry to miss it. At Cascade Creek, we were the only campers, and we chose a rocky ledge above the water to avoid the few mosquitoes down lower. Flash cowboy camped with her head net while I set up my tent. The zipper gave up the ghost so I stuffed my head net in the gap and hoped for the best.

Though each mile was starting to feel long, tomorrow we would enter Yosemite. It felt both too soon and too far. I had thought about Yosemite for days now, and here it was. Only three more days! This entire trip had been much more difficult than believed, but now I knew we were going to make it.
Posted by Mary at 10:08 AM