Less than a mile from our camp, we came to this: 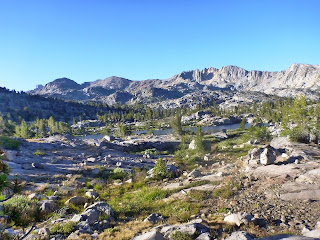 Dorothy Pass was not what I had expected. It was a flat, tarn-studded place of wonder. It would have been an outstanding place to camp. I'm one of those people who searches out the perfect campsite, and I was a bit annoyed we hadn't gone just a little further to find this one. But who knew? The PCT is full of surprises.

Below us lay large, windswept Dorothy Lake, where we did our laundry* and moved on, for a longish descent through forest and meadow. Yosemite is going to be EASY, I thought. What had all the fuss been about? We even got to "spa"..i.e. swim in a slow-moving river. 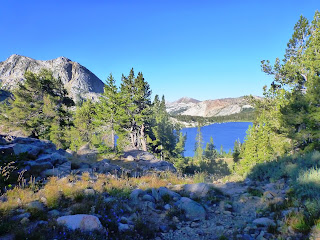 However, even as we hiked gently downhill, I had to admit, I was tired to my bones. Looking back, it's easy to see that I had the classic symptoms of overtraining: I had hiked over a week of 20 mile days, with little sleep and not enough calories. (I ended up losing four pounds in 11 days. Unfortunately those pounds found me again later) At the time though, I felt disturbed that my body wasn't responding like I thought it should. I always ask more of myself than I do of others. At Wilma (or Wilmer? the map and signs did not agree) Lake, Yosemite showed its true self. It was steep ascents up from deep, deep canyons, and mile an hour descents down rocky death defying slopes. We passed people in various stages of exhaustion and disbelief. Yosemite is hard. 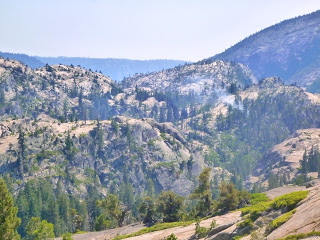 But also beautiful. We passed a small lightning fire on one of the canyon sides, and a trail crew using a complicated method of cab;es to move rocks. At the top of that canyon we passed a man wincing in pain from plantar fascitis. The rest of his group had moved past him hours ago and was nonchalantly lounging at camp. "Oh, he'll be here by dark," they predicted. I felt bad for the abandoned man and was glad Flash and I mostly stuck together.

One last brutal climb and descent and we reached a wide, flowing river where we threw down our belongings for the night. Flash came running back from the creek with delight, hardly able to speak. She had found the holy grail of backpackers: a large, sunny swimming hole! Yosemite was hard, but it also was perfect.

*Whoa there partner! Laundry in this case means scrubbing dirty socks vigorously while your hands freeze. NO SOAP. Bad for fishies!
Posted by Mary at 6:29 AM