Life in a "Crowded" Place 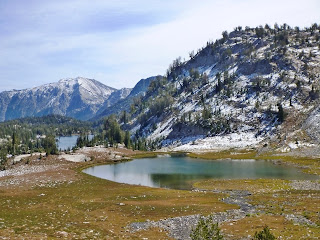 The past two weekends I spent in the Lakes Basin. Much maligned as being too crowded, in fact if you know where to go, it's a lovely slice of heaven. And even if there are people, so what? They are out there enjoying the wilderness, not doing a whole host of awful things that they could be doing. I've changed my views on seeing people in the mountains drastically. When I was a wilderness ranger, I wanted to see nobody. (Probably because I spent my days cleaning up after the less enlightened. There's only so much tin foil you can pick out of a fire pit before you jump the shark.) 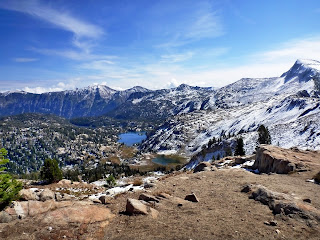 Now I am mostly good with seeing people, especially the two dads with their kids. Love it. Yes, there were people perched everywhere, but we found a campsite up on the rocks. Yes, I heard five women approaching, all of whom looked like they could not take another step. I heard one say, "We're just going to have to squeeze in on the rocks." Gah! But they squeezed in next to someone else. Not going to lie, I was glad. But the whole wilderness belongs to everyone. I remembered a night when we were freezing and wet in the  North Cascades, and the couple we had been leapfrogging peered down at our bedraggled selves from a spacious ledge. "This site's pretty small!" they proclaimed, clearly lying. I don't want to be like that.

And yes, there was the loud group of several who had blatantly pitched enormous tents, lawn chairs, solar showers, and a portable toilet less than 100 feet from the lake, in disregard of the setback rule. Not cool, but there are always a few like that. 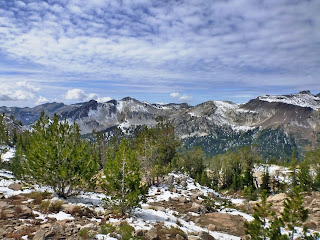 Despite all the people, the Lakes Basin is a peaceful place. You get the feeling it has seen many bad campers, and good ones, over the years, and still it endures. Crowded? Maybe by Wallowa Mountains standards. I counted five other camps within sound of ours. But everyone was happy and smiling. Who wouldn't want that?

I used to be much more of a purist, but over the decades I have seen that the average age of wilderness visitors is about 40-50 (this is different on thru-trails and perhaps in Colorado with fourteeners). Who will be left once those people are gone? Go out and bring your kids!

Big news: I am holding a copy of my novel! It is slated to be released in November but can be pre-ordered. The salesmanship pitches are saved for my author website, but just in case you want to know more, you can go here:
http://maryemerick.com/

It's a dream come true.