Yesterday one of my trail crew buddies from the distant past took a different trail,left the world a smaller and less vibrant place.

I'll always remember him as Trail Crew Dan, although he moved on from our trail days to do other things. I'll never forget sprinting after him, laden down with the cross cut saw and a shovel, determined to stay on his heels. After a creek crossing he turned to me in amazement. "I didn't think you'd be able to keep up with me," he said. I also remember days of playing Hearts, and  his admonishment, "No table talking!" when one of us let slip a remark about our cards.

I had a trail crush on Dan, like I did with all the trail crew guys, but it wasn't a I-want-to-date him kind of crush. It was more a mixture of admiring and respect, because like all the others Dan seemed more alive than most of the rest of the world. He wore a hat that could have been characterized as cowboy, but it worked. He wasn't afraid to talk philosophy on a fireline. Nothing fazed Dan,

Except, melanoma. I wonder when it began; maybe all those high elevation days as we swung pulaskis and shoveled out waterbars with little regard for sunscreen? Dan was an outdoors kind of guy. We never really thought about it much, that the sun we loved could also kill us. But there are other causes too, some genetic, some strange uneasy environmental cause we don't know much about, or just random bad luck.

I didn't keep up with Dan after I left those mountains, but I heard about him, that he married and had kids. I remember when he and his wife first met, saw her hiking in to meet him on the crew. To me, who only had an occasional, ephemeral boyfriend, it seemed like he had taken some giant adult step away from us.

As he has now. I heard about his death in  an airport, impossibly loud, impossibly crowded, and I blinked away the tears. How could our strong, invincible crew be broken? I know it's unrealistic to think that it won't; but Dan, how could  it be Dan, who owned an organic farm? It just isn't fair, like it wasn't with Ken, two years ago, who skied the tall peaks better than any of us ever could. Why not the bad people in the world, the ones who maybe deserved it?

It's not my loss. I wasn't there to see Dan all the years after our time in the mountains. He didn't come to our occasional reunions. But it's still a punch to the heart, because we all shared something wild and real, twenty-somethings doing work we thought of as important and big. Those people were my family, a tribe who understood seasonal work and migration and aching muscles.

Whenever Dan and I faced each other on either end of a misery whip, I knew it would be hard. He was so much stronger than I was, and when there is that imbalance, one person is tempted to push hard  towards the  other, less strong partner. I had been there before, with strong guys determined to prove something. Instead what you want to do is let them pull the saw toward them, but give a slight push as well. It's a delicate balance, a sweet dance, to make the cross cut saw sing. Dan and I could do it. Dan had the patience. Dan had all the time in the world.

Hike on, Dan. I'd be your partner on a misery whip anytime. 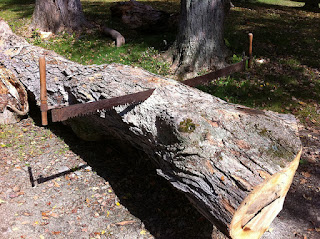