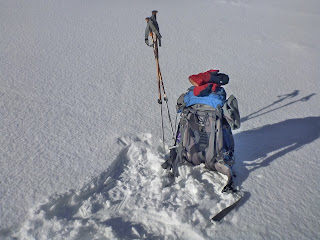 Halfway up the Hill of Death, I paused. "Why did I think this was a good idea?" I asked. After all, for J's birthday, I had taken him to Hawaii. For mine, I was slogging up a mountain with a backpack, on snow that was alternately crusty and caused my snowshoes to slide out of control, or so deep that I could barely move. Why did I keep doing such hard things?

When we had arrived at the place where we would start our climb to 8.000 feet, sixty mile an hour winds lashed the truck. A wet snow fell horizontally, stinging my face. As I hoisted my backpack, I was glad we were going to a hut instead of trying to put up a tent (I doubt a tent would have held up in those conditions). Even though we were going to a hut, we still were carrying most of our supplies, so I am going to call it backpacking!

J was on skis, the better choice. This was definitely not snowshoeing on packed trails. The route went straight up, often with a slippery sidehill. Even the dog looked a little put out. After two hours I felt a meltdown coming on. It was the infamous trifecta:  not enough food, intense conditions, and an irrational disappointment in myself for not performing better. "I hate backpacking on snowshoes," I growled. I might have thrown my trekking poles. But as with all meltdowns, once I had it I felt better. I resumed the one mile an hour slog and finally reached the hut.

Spartan yet welcoming, the hut provided much needed shelter. We set a pan of snow on the stove to use for drinking water. I shoveled out the outhouse (a tarp with a pit toilet). J bravely went for a quick ski run but I decided enough was enough. The wind howled ferociously all night. 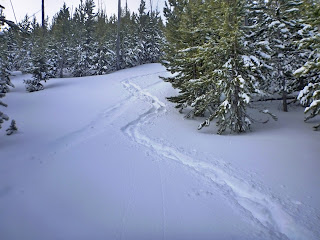 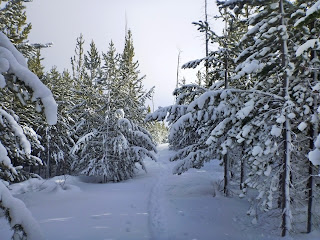 The next morning dawned clear and cold. I headed downhill through a powdery, sunlit world. There was nobody in sight, and it was warm enough to linger reading my book at the base of the Hill of Death while I waited for J to catch up (he stayed later to finish up chores). "I love snowshoe backpacking," I enthused. 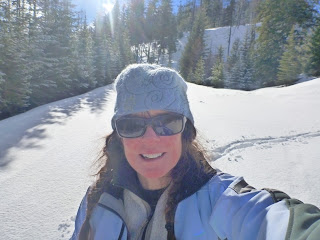 Tips: Eat. Drink. Snowshoeing with a pack is HARD. Embrace the slow pace. Also, I carried a Luci solar lantern for the hut. I probably wouldn't carry one on a normal backpacking trip but if you are going a more luxurious, base camp route, these little things are great! You can get the normal white color or one that has many colors. Great for a dark hut or a campsite with picnic tables.
Posted by Mary at 7:02 PM