The Grand Canyon in Winter, 2015 edition

"It feels like we've been down here a month," I say to TC on the morning of day four in the Grand Canyon. The Canyon is like that: timeless. Hours are somehow longer here, days encompass years. I feel like I have always been here. 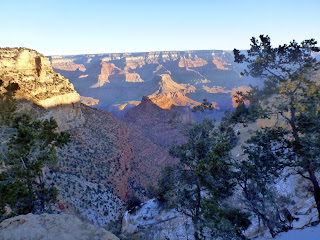 We are hiking rim to rim to rim again over six days. The four of us met here in the canyon two years ago as strangers. Now we are friends. Plenty of people do RTRTR in one day. We could do it faster, but why would you speed up your time in the canyon? Six days, I think, is barely enough. 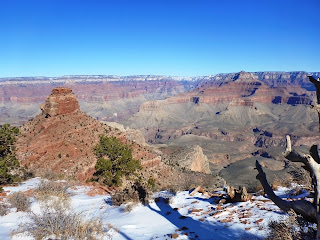 We start out on the South Kaibab trail on a brutally cold morning, just above zero. The trail is icy, requiring our microspikes right away. They stay on for at least two miles. Snow lingers far down the canyon, and even though the sun hits us by Tip-Off, it is still very cold. We reach Bright Angel to find the water shut off, the result of a pipeline replacement. Though this campground typically has the dubious luxury of flushing toilets, this is not the case today. Instead we must hoist buckets from a fold-a-tank, hoping not to splash ourselves in the process. By the time we have camp set up, a deep chill has sunk in.

My pack for this trip weighs in at 38 pounds, the result of my fear of cold. I am fine when I am moving, but what I dread are the sleeping and pre-sleeping hours. I have Raynaud's Syndrome, which means that arteries that supply blood to the skin are narrowed in response to cold. Typically, my fingers and toes turn white at low temperatures as available heat is diverted to my core. It's manageable but it means I can be colder at rest than most people. I am not a candidate for an Everest quest. Secretly, I wonder if I can do this and not be miserable.

But it turns out I have packed the right stuff.  Ultralight is not for winter camping. I wear my down vest, fleece pants, and puffy jacket, leaving the large puffy--the big gun--in reserve. (Like a chocolate stash, I like to have layers in reserve). Boiling our separate meals, we all are surprised how warm we are, even though it must be mid twenties.

We have a short day on Day 2, about seven miles to Cottonwood, a couple thousand feet higher. We meet people coming down with tales of horror. "Three feet of snow! We had to turn around on our way to the north rim," one woman says. "Did you bring waterproof pants?" She tells us that Cottonwood is very, very cold. Another couple says they made it to the north rim, but it was very snowy. One of them is wearing jeans. If he could make it in jeans, we can surely make it, we think.

The next morning we day hike to the North Rim. We leave early, which is a good decision. There is so much snow on the trail, and at the lower elevations it melts and turns to thick mud. We run into four guys on their way up, who say they wish they had left as early as we did. "Well, we left at eight," one counters.

"San Diego time," says a third. We laugh. It turns out they don't get back to camp until ten pm. (later, we see them carrying huge yucca stalks tied to their packs) Not us. We are in our tents by hiker midnight, which in winter can be as early as 7 pm. Some people would not be able to handle this much tent time, but to me it is a luxury, hours to sleep and read and do nothing.

We break camp and leisurely stroll back to Bright Angel, where I hang out on Boat Beach and finally feel warm. Not for long--this is the coldest night yet, below twenty. I make quick work of packing up and heading on the Bright Angel trail to Indian Garden, our last camp. Here, we debate. It is early: we could hike out and be in hotel rooms tonight instead of facing another twenty degree night with brutal winds. The ranger comes by and says she is leaving out extra pads and sleeping bags for campers because of the extreme cold. Hike out? No way. We are staying.


I leave early for a solo walk to the rim on the last day. I love this more than anything, walking by headlamp alone as the canyon slowly brightens. I've been here three times this year, and by all rights I should be over this place. But I'm not. The day after I get back I am reading up on the Grandview--South Kaibab route. Spring of next year, I think, maybe. 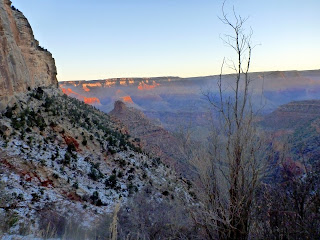 It is possible to camp comfortably in cold temperatures. Here's what worked: